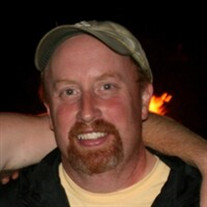 Orford, N.H.- James Mason Piper, age 44, died on Saturday, August 29, 2015 very suddenly at his home in Orford, New Hampshire with his wife by his side through his last moments.Jim was born on October 26, 1970 in Hanover, NH. He was the son of William and Beverly (Balch) Piper. He attended Lyme Elementary School and was a graduate of the Orford High School Class of 1988. He had been employed by the Dresden School District as a custodian since 1988, a job in which he took great pride in. Jim married his high school sweetheart Tammy on July 16th, 1994.Jim will always be known for the love he had for his precious daughters, Miranda and Samantha. They were the lights of his life. Anyone who knew Jim, knew ALL about the girls. He will be forever proud of them.Jim was an avid sports fan! He enjoyed all sports and will be remembered as an amazing athlete in his younger days. Jim enjoyed cheering for the New England Patriots and the Boston Bruins. It often appeared as if he were a part of the team as he felt every win and loss wholeheartedly. Jim was also a huge supporter of Rivendell Athletics. He was known to be on the sidelines, often not so gently letting "his boys and girls" know how they were performing. Jim's presence was always known and will be greatly missed.Jim's favorite pastime was to spend time with his beloved friends and family. Whether it was an adventure to the White Mountains, a trip to Gillette Stadium or Pittsburg for snowmobiling, or just enjoying a meal, it was always very memorable. Jim took pride in his lawn at his home and would often receive comments on how well manicured it was. Jim loved his family's dog, Max, and walked him several times a day. Max brought a distinctive dose of joy for Jim.Jim leaves his wife Tammy and his daughters Miranda and Samantha; his mother Beverly, his sister Pamela of Lebanon, his brother William "Reg" Piper and his wife Mari of El Cajon, CA; his sister Patty of Thetford Center, VT. He is also survived by very special nieces and nephews. Jim leaves behind many aunts, uncles, cousins, friends and countless children in the community who considered him as a second "dad".A graveside service will be held on Saturday, September 5th at 2:00 pm at the Highland Cemetery in Lyme. Following the service, all friends and family are invited to attend a gathering at the Lyme Legion to celebrate Jim's Life. The Hale Funeral Home of Bradford, VT is in charge of the arrangements. Go towww.halefuneralhomes.com to view an online guest book.In lieu of flowers, memorial contributions, in support of Jim's girls, may be made to a fund created by employees of Richmond Middle School titled "Piper Family Memorial Fund" at Mascoma Savings Bank. To plant Memorial Trees in memory of James Mason Piper, please click here to visit our Sympathy Store.

Orford, N.H.- James Mason Piper, age 44, died on Saturday, August 29, 2015 very suddenly at his home in Orford, New Hampshire with his wife by his side through his last moments.Jim was born on October 26, 1970 in Hanover, NH. He was the son... View Obituary & Service Information

The family of James Mason Piper created this Life Tributes page to make it easy to share your memories.

Send flowers to the Piper family.