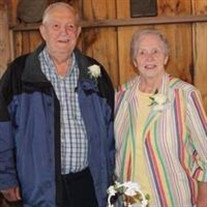 John Melvin Claflin, age 90, passed away on January 25, 2021 after years of declining health. John was born December 1, 1930 to Fred and Vera (Munroe) Claflin and grew up in Corinth, VT.On July 20, 1956, John married Juanita Spooner and they lived in East Topsham, VT until 1987 when they moved to Ben Dexter Road in Topsham and built a new home. In 2006 they moved to Ocala, FL to accommodate John's declining health.John served as Corporal in the US Army 57th Field Hospital in Korea from January 1953 thru December 1954. He was employed at Washington Creamery, the Town of Topsham Highway Department, Kelley Construction, Cooley's, Pike Industries, Bond Auto, and assisted Juanita at the Topsham town clerk's office where she was the town clerk from 2000-2004.John was an avid outdoorsman loving hunting, fishing, camping, snowmobiling and racing. He was a member of the Masonic Lodge, and a member of the Topsham Tri-Village Fire Department. He loved to play cribbage and in later years became an avid puzzler. Above all John loved to spend time with his wife, family, friends and community. He was always willing to lend a helping hand. He helped build many houses and built many chimneys.Preceding John were his parents, Fred and Vera Claflin, a grandson, Shawn Claflin, two brothers, Frank and Duane, three sisters, Olis Thurston, Olin Claflin, and Olive Eggleston, and a son-in-law Bryan Taylor.At the time of his death, John was survived by his loving wife of 64 years, Juanita, who died February 1, 2021. Other survivors include his four children, Timothy Claflin and companion, Barbara Watters of Williamstown, VT, Tammy Vaughan and husband Steward of Newbury, VT, Terry Claflin and wife, Linda of Topsham, VT, and Tina Taylor of Ocala, FL, 14 grandchildren, 28 great-grandchildren, his brother Ralph Claflin and wife Mary of Orange, VT, sister, Junis Thurston and husband, Malhon of Bradford, VT, a sister-in-law, Diana Claflin of Corinth, VT, 9 of Juanita's brothers and sisters, numerous nieces and nephews, and a large number of friends whose lives have been enriched by knowing John.A Celebration of Life will be held at a later date. In lieu of flowers, donations may be made to the Topsham Tri-Village Fire Department, in care of Edgar Downing, 16 Powder Spring Road, Topsham, VT 05076. Arrangements are by Hale Funeral Home in Bradford, VT. For more information or to offer online condolences, please visit Hale Funeral Home. To plant Memorial Trees in memory of John M. Claflin, please click here to visit our Sympathy Store.

John Melvin Claflin, age 90, passed away on January 25, 2021 after years of declining health. John was born December 1, 1930 to Fred and Vera (Munroe) Claflin and grew up in Corinth, VT.On July 20, 1956, John married Juanita Spooner and they... View Obituary & Service Information

The family of John M. Claflin created this Life Tributes page to make it easy to share your memories.

Send flowers to the Claflin family.