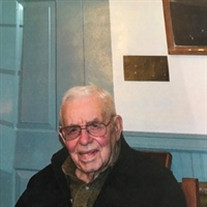 John Giacomini, 97, a resident of the Grafton County Nursing Home in Haverhill, NH, formerly of Newbury, Vermont and Barrington, Rhode Island, passed away on December 16, 2016. Born in Providence, Rhode Island on January 4, 1919, he was the son of the late Cataldo Giacomini and Filomena (Natalizia) Giacomini. He was predeceased by his sisters Mary Assaiante and Felicia Del Padre, and brothers Frank and Angelo.John was a loving husband and father who was dedicated to his family. Coming of age during the Great Depression, John spent his formative years learning the need for both hard work and sharing. After the United States entered World War II, John volunteered for service. He spent four years with the Air Force in England as a ground controller for incoming aircraft. Although reticent about this time in younger years, in later life he enjoyed speaking of this exciting period of his youth.John married the late Viola (Lombardi) Giacomini of Barrington shortly after he returned home. They raised three children, Nancy Martin of Newbury, Vermont, Robert Giacomini of Atlanta, Georgia, and John M. Giacomini of Riverside, Rhode Island. After the passing of Viola, John married the late Helen (DiOrio) Giacomini of Barrington.Throughout his life, John found purpose in both his family life and work. For both Viola and Helen he provided an unmatched level of love and support during their illnesses in later years. For his children, he was always supportive, although tinged with the conservative outlook of a child of the Great Depression. He encouraged them and instilled in them the need for working hard and getting a good education. In work, he had an intrinsic ability to solve mechanical problems that might challenge others. He could look at a problem, evaluate it and find a solution. This attribute was especially useful during his long time position with the Maintenance Department with the Barrington Public Schools.In addition to his three children, John is survived by a sister, Anna Giacomini, daughter Nancy's husband Dan, son John's wife Rosemary Giacomini and their children John Ryan Giacomini and his wife Keri, Erin Collins and son Patrick and Elizabeth Giacomini and daughter Sophie Lytle.A graveside service will be held at the Lime Kiln Cemetery in Newbury, Vermont in the spring.The Hale Funeral Home and Cremation Care of Bradford, VT are in charge of arrangements.To view an online guestbook go to www.halefuneralhomes.com To plant Memorial Trees in memory of John Giacomini, please click here to visit our Sympathy Store.

John Giacomini, 97, a resident of the Grafton County Nursing Home in Haverhill, NH, formerly of Newbury, Vermont and Barrington, Rhode Island, passed away on December 16, 2016. Born in Providence, Rhode Island on January 4, 1919, he was the... View Obituary & Service Information

The family of John Giacomini created this Life Tributes page to make it easy to share your memories.

John Giacomini, 97, a resident of the Grafton County Nursing...

Send flowers to the Giacomini family.