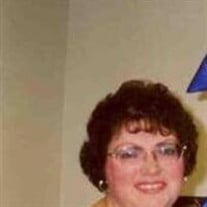 Judy Mary (Ward) Carpenter, 59, of Thetford Center, VT passed away from this life the evening of Tuesday October 1, 2013 at home after battling a long and debilitating illness. Her loving family, friends, and caregivers surrounded her. Judy was predeceased in death by her Father, Stephen Ward, her Mother, Anita Lena Crowley, her Stepfather, Ed Crowley, and her Stepbrother, Timothy Crowley, and Stepbrother Juan Crowley. Judy is survived by her devoted husband, Roger Carpenter of Thetford Center, VT, her four beloved children, Laura (Carpenter) Wilmot and her husband Ronald of Bradford, VT, Kimberley (Carpenter) Chase of West Fairlee, VT, Andrew Carpenter of Bradford, VT, and Lawrence Carpenter of W. Lebanon, NH, her brother, Chester Ward of Post Mills, VT, her cherished grandson, (Richard) Alexander Chase, her loving nephews and nieces, Sheila Bedi, Melvin Singer, Katie Brodeur, and Mikayla Spaulding, and several cousins. Judy Ward was born in Claremont, NH on February 13, 1954 to Stephen Ward and Anita Lena (Decato) Ward. Judy moved to Thetford Center, VT with her Mother and Brother, Chester Ward, when she was 10 years old. She attended Thetford Elementary and Thetford Academy. She married Roger Carpenter of Vershire,VT on October 10, 1970. She and Roger loved and lived together in Thetford Center, VT for 43 years, where they raised their four children, built a successful business, and formed deep and lasting friendships. Judy will forever be remembered for her profound devotion to her family and her allegiance to her friends. She was the glue that held her family together in good times and bad. Judy was a mentor, advisor, and confidante to many. She was a phenomenal cook who delighted in spending hours preparing large meals and baked goods for her family celebrations. Thanksgiving and Christmas were her favorite holidays, when her family and friends surrounded her. She is well known for her delicious homemade pies at the Thetford Center Community Suppers. Judy enjoyed spending time with her Grandson, whether it was helping him with his home schooling, attending his sports events, or just snuggling, Alex was the apple of "Nana's" eye. Among her hobbies where playing Spider Solitaire, learning to play the harp, taking photos of her family, playing Scrabble, and collecting her angels. Judy loved to travel, and over the years made four cross-country trips with her family. Her favorite time away, however, was her yearly anniversary trip to Ogunquit, Maine with her husband where she enjoyed holding his hand, walking on the beach, and trying new restaurants. Judy was a member and Co-Leader of the Orford, NH TOPS Club for 10 years where she received many awards for her scrapbooking and song writing. Nevertheless, she always said that her greatest accomplishment in life was her children. There will be no calling hours. Funeral services will be held at the Post Mills Congregational Church on Saturday October 5, 2013 at 10:00am with Pastor Joseph Grabowski of Acres of Hope Christian Fellowship officiating. Burial will be held at a later date. There will be a celebration of Judy's life at her home in Thetford Center following the service. In lieu of flowers, donations may be made to Special Olympics Maine, 125 John Roberts Road #5, South Portland, ME 04106 The family would like to extend their gratitude to Dr. Harold Manning MD, Pulmonary, and Critical Care at Dartmouth-Hitchcock Hospital, Dr. Alan Kono MD, Congestive Heart Failure Clinic, Dartmouth-Hitchcock Hospital, and Bayada Home Health Care. The Hale Funeral Home of Thetford Center, VT is in charge of arrangements. To view an online guestbook go to www.halefuneralhomes.com. To plant Memorial Trees in memory of Judy Mary Carpenter, please click here to visit our Sympathy Store.

Judy Mary (Ward) Carpenter, 59, of Thetford Center, VT passed away from this life the evening of Tuesday October 1, 2013 at home after battling a long and debilitating illness. Her loving family, friends, and caregivers surrounded her. Judy... View Obituary & Service Information

The family of Judy Mary Carpenter created this Life Tributes page to make it easy to share your memories.

Send flowers to the Carpenter family.