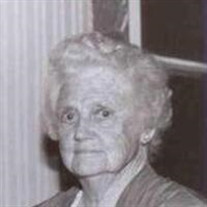 She was born in Somerville, MA, the daughter of Charles and Gertrude (Vinton) Mentzer. The family moved to North Williston, VT when Julia was about four years old and she grew up a "Vermonter". She attended the Essex Junction High School, commuting to school on horseback. After her father's death in 1923, Julia and her mother moved to Cambridge, MA where Julia attended Lesley Normal School (now Lesley University) graduating in 1926. She taught school in Somerville for three years. In 1930, she married Charles Paget Golding in a ceremony at the farm of George Clark in Plymouth, NH. The Goldings started out in Longmeadow, MA where their children, Ann and Charles P., Jr., were born. They moved to South Dartmouth, MA in 1935 and Julia remained there until 1963. While in South Dartmouth, Julia and Charles were active in The Spouters, a local theater group and Julia was a member and a past president of The Garden Club of Buzzard's Bay (GCBB). She was the Captain of the New Bedford Red Cross Motor Corps during World War II. Julia was widowed in 1947 and embarked on a career as a Landscape Gardener (her mother and grandmother were both gardeners) while raising her children. She was very involved in the GCBB's participation at the Boston Flower Show for many years. In 1960 Julia married Clifford Crane Fifield, an old family friend. They moved to her mother's home in Orford, NH in 1963. Julia was very active in Orford as a member of the school board, chairman of the cemetery commission (which she took over from her husband after his death in 1978) and a longtime trustee of the Orford Social Library, a special interest, and a member and past president of Rondo. She helped spearhead the fund drive for Orford's Community Fields and participated in Orford's Bicentennial Celebration. She was a regular fixture at the annual Old Home Day. She was one of the founders of St. Martin's Episcopal Church in Fairlee, VT and a devoted communicant. In Hanover, she was very active with The Friends of the Hopkins Center and the Hood Museum of Art at Dartmouth College and was instrumental in the start of the Montshire Museum at its original site in Hanover. She also was instrumental in the development of The Magic Carpet program of the Montshire which continues to this day. She was an honorary member of The Hanover Garden Club. Julia was trustee of the Canterbury Shaker Village in Canterbury, NH for ten years and Chairman of the New Hampshire Preservation Association Review Board for three terms, appointed first by Governor Meldrim Thomson. She was on the committee for the restoration of the Bedell Bridge in Haverhill, NH and a Colonial Dame in the National Society of Colonial Dames of America, New Hampshire Chapter. She was also active in The Garden Club of America, serving as national chairman consecutively of the Horticulture Committee, the Flower Shows Committee, and the Conservation Committee. Following those assignments, she was a Director. She received the Acheivement Award of the Garden Club of America in 1988, a singular honor. Julia loved Orford. She held the Boston Post Cane which she received in 1995. She always attended Town Meeting although her recent attendance was limited due to hearing loss. She was devoted to her friends, both in Orford and in Hanover and surrounding towns. She particularly enjoyed attending Dartmouth football games and in later years, her lunch groups in town. She will be sorely missed by her family and friends. She is survived by her daughter, Ann (Joe) Davis of Orford, her son, Paget Golding of Bradenton, FL, three stepsons, George (Helen) Fifield of Sterling, MA, Crane (Fay Ann) Fifield of Seneca Falls, NY and Walter (Jeanne) Fifield of Concord, NH, and her beloved grandchildren and great-grandchildren. Contributions in her name will be welcome at St. Martin's Episcopal Church, P.O. Box 158, Fairlee, VT 05045 and at The Orford Social Library, P.O. Box 189, Orford, NH 03777. There will be a private committal service at the convenience of the family. Also there will be a Celebration of Julia's Life in May, time and date to be determined, in the garden of her Orford home. The Hale Funeral Home of Bradford, VT is in charge of arrangements. To view an online guestbook go to www.halefuneralhome.com To plant Memorial Trees in memory of Julia Mentzer Fifield, please click here to visit our Sympathy Store.

She was born in Somerville, MA, the daughter of Charles and Gertrude (Vinton) Mentzer. The family moved to North Williston, VT when Julia was about four years old and she grew up a "Vermonter". She attended the Essex Junction High School, commuting... View Obituary & Service Information

The family of Julia Mentzer Fifield created this Life Tributes page to make it easy to share your memories.

She was born in Somerville, MA, the daughter of Charles and Gertrude...

Send flowers to the Fifield family.