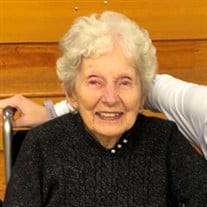 Newbury, Vt.- Kay Hodge, 89, of Newbury passed away peacefully on March 8, 2019 at the Atkinson Residence for the Retired surrounded by her sons Greg & Peter.She was born on June 30, 1929 at the family farm in Newbury. She was the daughter of Dexter A. and Marion Bowen George. She attended Schools in Newbury and graduated from Town Central School with the class of 1947.After graduation, she held various jobs including a short stint at the former Mary Hitchcock Memorial Hospital in Hanover, NH. On March 21, 1950, she married Guy E. Hodge of Bradford. They were married just over 58 years before he predeceased her on October 8, 2008.After her marriage, they traveled extensively in the US and abroad while Guy served in the U S Army. She loved the 4 years they spent in Germany along with Sons Michael and Greg. She remembered fondly the trip they took to the Italian Riviera.In 1966, Guy retired and they moved back to Newbury into the house that Kay had admired as a young girl walking by on her way to school. They raised their family there and she remained until 2013 when she moved in with her brother Johnny. During her younger years, she worked for Dr. Munson & Dr. Cassani, both of Bradford until she retired in 1989. She loved her home, doing yardwork, mowing the lawn, tending her beautiful flowers and watching her grandchildren grow up. She also loved her animals, especially her bulldogs Max and Gus. She was very active and could be seen very early in the morning taking her 3 mile walk around the village. She was a member of the Newbury Congregational Church for many years and was active in the various church affairs and events.She is survived by her Son Greg and his partner Peg along with Grandchildren Michael & Mikayla; Peter and his partner Lynn and her 2 boys Tom and Mitchell. She is also survived by several nieces and nephews. She was predeceased by Son Michael, a sister Bettina Hume and a brother, Johnny George.Graveside funeral services will be held in the spring at the Oxbow cemetery in Newbury, VT. There are no calling hours. Donations in Kay's memory can be made to the Atkinson Home for the Retired, 4717 South Main St., Newbury, VT. 05051.fThe Hale Funeral Home of Bradford, VT is in charge of arrangements. Online guestbook at www.halefuneralhomes.com. To plant Memorial Trees in memory of Kay Hodge, please click here to visit our Sympathy Store.

Newbury, Vt.- Kay Hodge, 89, of Newbury passed away peacefully on March 8, 2019 at the Atkinson Residence for the Retired surrounded by her sons Greg & Peter.She was born on June 30, 1929 at the family farm in Newbury. She was the daughter of... View Obituary & Service Information

The family of Kay Hodge created this Life Tributes page to make it easy to share your memories.

Send flowers to the Hodge family.