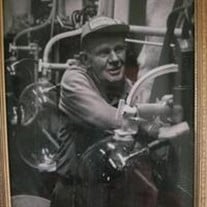 Kenneth Watson Doyle, 91, died peacefully in his home on Wednesday, November 13. He was born August 16, 1928 in Strafford, Vermont, a son of James and Mildred (Judd) Doyle.He graduated Thetford Academy June, 1946, and after graduation worked the family farm. He worked the farm continuously through this past summer. He will be remembered for his love of family, farming, and hunting, as well as his amazement with nature.He was married on June 7, 1964 to Lois J. Tullar. They built their home near the farm where they raised their three children.Kenneth leaves his wife, Lois, and three children, Lisa Kathleen, Timothy Kenneth and his wife Dawn and Stephanie Kara and her husband Joseph "Skip" Nalette. He also leaves eight grandchildren, Joseph, Keely, Michaela, Taylor, Mason, Dawson, Kaitlin and Carter. He also leaves siblings Paul, Richard, Marjory Christiansen and Dorothy Santoleri and many nieces and nephews. He was predeceased by his brothers, Russell, Dawson, William, Donald, Robert, and Charles and sisters, Catherine King, Ruth Waterbury, and Shirley Doyle Godfrey.A service is planned for the spring. In lieu of flowers, please consider a donation to the James and Mildred Doyle Scholarship Fund, Thetford Academy Development Office, 304 Academy Road, Thetford Center, VT, 05075. Arrangements are under the direction of Hale Funeral Home in Bradford, VT. To plant Memorial Trees in memory of Kenneth W Doyle, please click here to visit our Sympathy Store.

The family of Kenneth W Doyle created this Life Tributes page to make it easy to share your memories.

Kenneth Watson Doyle, 91, died peacefully in his home on Wednesday,...

Send flowers to the Doyle family.