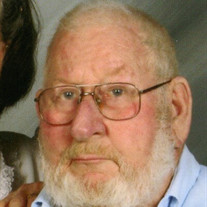 Kenneth Robinson, age 87, passed Friday, August 20, 2021.  He was born August 2nd,1934 right at home above Lake Fairlee in Post Mills, as was the custom at the time.  He lived and rarely strayed from the acreage where he was born until the death of his ever faithful and long suffering wife in July 2016.  He spent his remaining years being well cared for first at Valley View Home for the Retired in Fairlee VT.  This kept him close and allowed his children to get him to the Bacon Reunion and the CRACK Antique club's August show which he greatly enjoyed.  His deteriorating condition necessitated a move to Grafton County Nursing Home in 2018 where the level of care increased and he became known as "Winky".  Thank you one and all for your exemplary care. Kenneth graduated from Thetford Academy in 1953 and entered the Airforce in January 1957 serving until January 1961 all in peacetime.  Ken & Janice were married in St. Petersburg FL (where she was employed at the Vinoy Park Hotel) on April 23, 1959. Kenneth insisted he was born a century too late holding onto the old ways of doing things and resisting new fangled ideas and ways.  He worked as a carpenter or in concrete his whole life.  He spent his life working the land, sawing lumber on the Lane mill, logging with oxen he helped the children train thru 4-H, maple sugaring, haying, corn silage, beef cattle and pigs, potatoes by the bushel.  Kenneth is pre-deceased by his wife Janice, his parents Carrie and Alfred, two sisters Rose and Florence (her twin Frances died in infancy).  Ken is survived by his sister Nina of Castine ME also four children:   Nancy, Jessica, Earl & Eric, six grand children and two great-grandchildren. Hale Funeral Home is handling the cremation.  Graveside services will be held on Saturday, August 28th at 11am in Post Mills Cemetery.  There will be a gathering and celebration of his life in the lower church hall until it's time to bale hay. In lieu of flowers donations may be made to The Post Mills Cemetery Association, Inc., c/o Marilyn Cook, Clerk; PO Box 26 Post Mills, VT 05058. To plant Memorial Trees in memory of Kenneth Robinson, please click here to visit our Sympathy Store.

Kenneth Robinson, age 87, passed Friday, August 20, 2021.  He was born August 2nd,1934 right at home above Lake Fairlee in Post Mills, as was the custom at the time.  He lived and rarely strayed from the acreage where he was born until the death... View Obituary & Service Information

The family of Kenneth Robinson created this Life Tributes page to make it easy to share your memories.

Send flowers to the Robinson family.