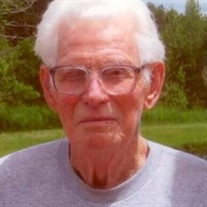 Bradford, VT-Leland Royce Boyd, 94, died peacefully at home in Bradford, VT on July 30, 2015 just shy of his 95th birthday. He was born October 17, 1920, in Trinity, KY, the son of Gladys (Nash) and Samuel Boyd.Royce, as he was known, graduated in 1942 from Eastern Kentucky University with majors in mathematics and physics. He received his Master's Degree in physics from the University of Kentucky in June, 1944. He would forever remain a Kentucky Wildcats basketball fan.Following graduation he worked as a physicist for the Naval Ordnance Laboratory in Silver Springs, MD.On March 23, 1945, he married his college sweetheart, Jacqueline Marie Yavecchiain Baltimore, MD. They lived in Washington, D.C. until September 1948 when they moved to Waterford, CT, and later to Old Lyme, CT where they continued to raise and love their family. He was a physicist at the Naval Underwater Systems Center until his retirement. He was a member of the Old Lyme Congregational Church and following services spent many a Sunday enjoying golf where he was a charter member of the Black Hall Golf Club in Old Lyme.In 1968 he and Jackie purchased their home on South Road in Bradford, VT. They happily retired there in July 1980. He was a member of the United Church of Christ where he held various offices, the Bradford Community Club, and the Sunshine Candlepin League, and enjoyed many rounds of golf at the Bradford Golf Club. Royce was well-loved by neighbors and friends and he treasured the South Road farm which he lovingly tended throughout all of his years. He was inducted into the Hall of Fame with a Lifetime Achievement Award in October, 2010 presented to him by his family at his 90th birthday celebration attended by family and dear friends. He was a faithful New England sports fan - Red Sox, New England Patriots, Boston Celtics, and UConn men's & women's basketball. He was a consummate PGA tour golf fan. Royce was a man of his word and always there to give a helping hand to anyone in need. He served his community and many causes through charitable contributions throughout his life.After Jackie passed away in December, 2004, he was fortunate to find love again with a good friend and widow, Rosa Heidenreich. Rosa and Royce enjoyed seven beautiful years together at the farm until Rosa's passing at age 100 in September, 2012.He was predeceased by a sister, Jeanne Wigginton, and a niece, Christine Elliot Mullan.He will be dearly remembered by his brother and sisters and their families; Dr. Earl Neal Boyd, Emma Nash Bevacqua, and Charlene Gracey.His family that survives him will miss him dearly and cherish him always but feel fortunate to have shared life and love and learned from him as long as they did. Daughters, Alison Bevin of Mansfield Center, CT and partner Stuart Day, Jennifer Boyd of Bradford, VT, and Marilyn Foster and husband, David of Hampton, CT; Grandchildren and families; Dr. Christopher Bevin and wife, Angela of Bennington, VT and great grandchildren, Austin, Collin, and Aiden and great-great-granddaughter, Maya; Alison Love and husbandMatt of Parker, CO and great grandchildren, Madeline and Colton; granddaughter, Sarah Fitzhenry, of South Ryegate, VT. He will lovingly be remembered by his nephew, David Elliott and wife Barbara of Newport Beach, CA and sister-in-law, Roberta Elliott of Provincetown, MA and the extended Mullan family, Mick, Kate, Liz, John and Sam. His memory will be cherished by his like-a-daughter and dear friend, Mona Russin of Newbury, VT.He will be fondly remembered and toasted by his South Road "family" and numerous friends in Bradford. He loved and cared for his caregivers, Deborah Stone, Pamela Wilcox, Cindy Marecki, and Wanda Howe, as they in turn, loved and cared for him.Royce epitomized the following definition of success written in 1904 by Bessie Anderson Stanley."He has achieved success who has lived well, laughed often and loved much; who has enjoyed the trust of pure women, the respect of intelligent men and the love of little children; who has filled his niche and accomplished his task; who has left the world better than he found it; whether by an improved poppy, a perfect poem or a rescued soul; who has never lacked appreciation of Earth's beauty or failed to express it; who has always looked for the best in others and given them the best he had; whose life was an inspiration; whose memory a benediction."To honor his wishes, there are no calling hours or service. Contributions may be made in his memory to the Bradford Public Library, PO Box 619, Bradford, VT 05033Hale Funeral Home of Bradford, VT is in charge of arrangements.To view an online guestbook go to www.halefuneralhomes.com To plant Memorial Trees in memory of Leland Royce Boyd, please click here to visit our Sympathy Store.

Bradford, VT-Leland Royce Boyd, 94, died peacefully at home in Bradford, VT on July 30, 2015 just shy of his 95th birthday. He was born October 17, 1920, in Trinity, KY, the son of Gladys (Nash) and Samuel Boyd.Royce, as he was known, graduated... View Obituary & Service Information

The family of Leland Royce Boyd created this Life Tributes page to make it easy to share your memories.

Send flowers to the Boyd family.