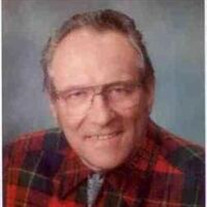 Fairlee, VT- Leon C. Marsh Jr., 83, of Fairlee died Wednesday, May 6, 2015 at his home surrounded by his family. He was born on September 27, 1931 in Orford, NH the son of Leon C. Marsh Sr. and Irene (Elliott) Marsh. He attended schools in Orford, NH. Lee spoke fondly of his happy and humble childhood fishing, hunting and playing with his siblings and all the other children in Orfordville. He was drafted into the United States Army in August of 1952 and fulfilled his duties in 1954. He obtained the rank of Staff Sergeant while serving in the First Calvary as a ski instructor in Hokkaido, Japan the northernmost island of Japan forty miles from the Russia border. He enjoyed reminiscing about teaching southern soldiers how to ski. He was very proud of his country and service to it. He was employed in the LP Gas industry for forty- one years; Lee served the public in one position or another for nearly fifty years, including positions as Chief of Police, Constable, Orange County Deputy Sheriff, Collector of delinquent taxes, Fairlee Fire Department, Vermont Fish and Game Deputy Warden. He and Nelson Simonds of Newbury, VT were the first Vermont Police officers to provide snowmobile patrols in Vermont. He treasured country music, singing and playing the guitar and banjo, feeding birds, photography and their cat Morey. Lee was a loving family man, devoted husband, father, grandfather, great-grandfather and friend; servant of the Town of Fairlee, the State of Vermont and his country. He is survived by his wife of Sixty-Two years, Helen Huckins Marsh; two sons, Scott Marsh and and Mark Marsh; six grandchildren, Hillary Marsh, Meagan Marsh children of Mark and Esther Dobbins Marsh Clara Lauder, Hannah Lamarre, Natalie Marsh and Evan Marsh children of Scott and Deborah Marsh; two great-grandchildren, Isabelle and Tristen Lamarre; two sisters, Dorothy Covey and Diane Claflin and one brother, Raymond Marsh. He was predeceased by two sisters, Marjorie Pike and Maxine Pike and one brother William Marsh A celebration of his Life will be held on Friday, May 15, 2015 at 11 am in the Fairlee Community Church in Fairlee, VT. There are no calling hours. Burial will be held at a later date. In lieu of flowers donations in his memory may be made to the Lake Morey Protective Association, PO Box 241, Fairlee, VT 05045. The Hale Funeral Homes and Cremation Care of Bradford, VT are in charge of arrangements. To view an online guestbook go to www.halefuneralhomes.com To plant Memorial Trees in memory of Leon C Marsh Jr, please click here to visit our Sympathy Store.

Fairlee, VT- Leon C. Marsh Jr., 83, of Fairlee died Wednesday, May 6, 2015 at his home surrounded by his family. He was born on September 27, 1931 in Orford, NH the son of Leon C. Marsh Sr. and Irene (Elliott) Marsh. He attended schools in Orford,... View Obituary & Service Information

The family of Leon C Marsh Jr created this Life Tributes page to make it easy to share your memories.

Send flowers to the Marsh family.