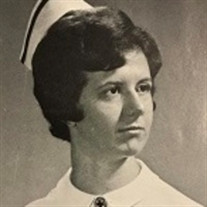 Waits River - Lillian Appleton, 70 of Waits River died August 21, 2017 at her sister's home. Born on June 11, 1947 in Hanover, NH, she was the daughter of Kenneth and Pearl Appleton.She attended Topsham graded schools and graduated from Bradford Academy in the class of 1965. She went on to earn her nursing degree from Springfield Hospital School of Nursing in 1969. After graduation, she made her home in Springfield, Massachusetts.On August 1, 1970, she married Gibson Bryant and later divorced.She was employed many years at Baystate Medical Center and retired from Dr. Keenan, Malladi, and O'Neill Office.Lillian was active in many clubs while living in Springfield, the Shriners, and Daughter of the Nile were among a few.After retiring she moved back to her home town, Waits River, to be close to family.In her spare time, she loved watching the Red Sox and NASCAR racing, knitting and making pottery. She also loved animals, especially her dog Gigit and cat Pooh.Survivors include: sister Marie Brooks of West Topsham, brothers: William Appleton and wife Carol of Waits River, Kenneth Appleton of Waits River, Gerald Appleton and wife Ginny of Waits River, sister-in-law Joy Appleton of Corinth, nieces, nephews, great nieces, great nephew, great-great nieces, and great-great nephew.Lillian was predeceased by her parents, her brother James Appleton and brother-in-law Peter Brooks.A graveside service will be conducted at a later date.The Hale Funeral Homes and Cremation Care of Bradford, VT are in charge of arrangements.To view an online guest book go to www.halefuneralhomes.com To plant Memorial Trees in memory of Lillian Appleton, please click here to visit our Sympathy Store.

Waits River - Lillian Appleton, 70 of Waits River died August 21, 2017 at her sister's home. Born on June 11, 1947 in Hanover, NH, she was the daughter of Kenneth and Pearl Appleton.She attended Topsham graded schools and graduated from Bradford... View Obituary & Service Information

The family of Lillian Appleton created this Life Tributes page to make it easy to share your memories.

Send flowers to the Appleton family.