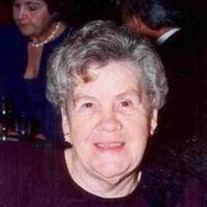 Bradford, VT-Lodoiska (Maxwell) Kingsbury, 84, passed away on February 27, 2014 at her home in Bradford, VT surrounded by loving family. Born on January 14, 1930 in Brownington, VT, she was the daughter of Roger and Mary (Joslyn) Maxwell. She was a graduate of the class of 1949 at Bradford Academy. On October 16, 1949 she married the love of her life, Homer H. Kingsbury, Sr. in Bradford. They had always made their home in Bradford. In addition to being a wife, mother and homemaker Lodoiska cleaned for local businesses and homes in earlier years and was the cook at Bradford Elementary School for 20 years until her retirement. She had been a member of the Bradford Fireman's Auxiliary and she and Homer operated the food booth in the pits at Bear Ridge Speedway for many years. Family was the most important thing to her. She attended as many of her children, grandchildren and great grandchildren's sporting events as she possibly could. Her passion was playing Bingo and she enjoyed all the close friends she made there. She was an avid Boston Red Sox fan, followed Nascar and enjoyed going to yard sales and making trips to Las Vegas, Foxwoods and Atlantic City. Survivors include her husband of 64 years, her children; Homer, Jr. and Shirley of West Newbury, Terry and Rise of Topsham, Kay and Buddy Trojanowski of West Topsham, Paul and Christine of Bradford, Allan and Susan of Hillsboro, NH and Mark and Sharon of West Topsham, nineteen grandchildren; Tracey and Robert Gauthier, Jamie and Elizabeth Kingsbury, Evan Kingsbury, Willy and Jennifer Kingsbury, Buck and Suzanne Kingsbury, Tara and Steve Simpson, Billie Jo and Charlie Martin, Scott and Lindi, Eric and Amie Trojanowski, Tawnya Baker, Corey and Thelma Kingsbury, Jennifer Trojanowski and Doug Petterson, Kristina Kingsbury and Carmen Schoolcraft, Benjamin and Christina Kingsbury, Kelly Kingsbury, Elizabeth Kingsbury, Katlyn Kingsbury, Timothy and Felicia Kingsbury, Tad Kingsbury and Vanessa Thurston, twenty-five great grandchildren, two brothers; Maurice and Lois, Carl (Joe) and Veanne Maxwell, two sisters; Barbara Jean Wright and friend and Judy and Ken Bupp, brother in law Robert (Sonny) and Joan Kingsbury and sister in law Freda Kingsbury, and many nieces and nephews. Lodoiska was predeceased by her parents, five brothers; Charles, Darrell, Lawrence, Dale and Alton, one sister; Juanita French and one brother in law; John Kingsbury. In lieu of flowers donations may be made to Visiting Nurse and Hospice of Vermont and New Hampshire, 66 Benning Street, Suite 6, West Lebanon, NH 03784, American Cancer Society, PO Box 22718, Oklahoma City, OK 73123-1718 or Orange East Senior Center, 176 Waits River Road, Bradford, VT 05033. Visiting hours will be held Friday, March 7, 2014 at Hale Funeral Home, 187 Upper Plain, Bradford, VT from 5 p.m. to 8 p.m. Funeral services will be held on Saturday, March 8, 2014 at 11 a.m. at the Grace United Methodist Church in Bradford, VT. The Hale Funeral Home and Cremation Care of Bradford, VT are in charge of arrangements. To view an online guestbook go to www.halefuneralhomes.com. To plant Memorial Trees in memory of Lodoiska Maxwell Kingsbury, please click here to visit our Sympathy Store.

Bradford, VT-Lodoiska (Maxwell) Kingsbury, 84, passed away on February 27, 2014 at her home in Bradford, VT surrounded by loving family. Born on January 14, 1930 in Brownington, VT, she was the daughter of Roger and Mary (Joslyn) Maxwell. She... View Obituary & Service Information

The family of Lodoiska Maxwell Kingsbury created this Life Tributes page to make it easy to share your memories.

Send flowers to the Kingsbury family.