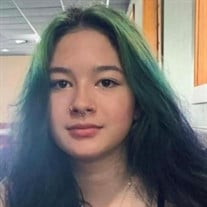 Not sure what to send?

Lorraina Torres-Dindo Lorraina Racquel Torres-Dindo, 19, of Bradford, VT passed away unexpectedly while surrounded by loved ones at Dartmouth-Hitchcock Medical Center on June 18, 2022. Raina, as she preferred to be called, was born on September 21, 2002 at Central Vermont Medical Center. She resided in Bradford, VT for most of her life and attended Bradford Elementary and Oxbow High School. Raina was employed at Kendal at Hanover in Hanover, NH where she endeared herself to both the residents and her co-workers. She loved her work and the relationships she made there. She had a natural tendency to try to rescue all living creatures, often bringing them home to foster and love them back to health or find an appropriate place to bring them so that could receive the care they needed. Raina's final gift was to donate some of her organs to save four people, one of whom was a little boy in his first decade of life, who received her heart. Raina had an incredibly loving way about her. Through her struggles she always provided love, compassion, humor and loyalty to others. She couldn't bear to see her loved ones in pain and would sit with them and crack jokes or say ridiculous things until they could smile again. She had an infectious humor that will be greatly missed. Her generous spirit helped those in need – giving food to the homeless, helping the elderly and donating to community and national causes that she believed in. Raina is survived by her partner, Ida Markwood of Norwich, VT, her mother and husband, Danielle Dindo and Kevin Stockman of Orford, NH, her sister, Helina Torres-Dindo and grandmother, Lorraine Gaboriault of Bradford, VT, her uncle, David Dindo of Seattle, WA, her uncle and his family, Howard and Michelle Dindo and their children, Harrison and Tessa of Williamstown, VT, her great-aunt and her husband, Sylvia Gaboriault and Joe Dauscher of Barre, VT, her great-aunt and her husband, Linda and Patrick Walters of Evans, CO, her grandfather and his wife, Howard & Ramona Dindo of Littleton, NH, her dog, Ace and her rabbit, Dominic, and countless friends and extended family. Calling hours will be arranged at Hale's Funeral Home, 187 Upper Plain, Bradford, VT. A Celebration of Raina's Life is planned for July 9, 2022, from 3 to 10 p.m. at the East Corinth Ball Field, 113 Fairground Road, East Corinth, VT. All are welcome to come and share in her memory. Raina was passionate about animal rescue and her active role in the LGBTQ+ community. Her family is encouraging those who wish to make a memorial contribution to send their donation in her name to one of the following: The Central Vermont Humane Society P.O. Box 687 Montpelier, VT 05601 centralvermonthumane.org The Rainbow Bridge Community Center 81 North Main St., Suite 2 Barre, VT 05641 rainbowbridgevt.org

Lorraina Torres-Dindo Lorraina Racquel Torres-Dindo, 19, of Bradford, VT passed away unexpectedly while surrounded by loved ones at Dartmouth-Hitchcock Medical Center on June 18, 2022. Raina, as she preferred to be called, was born on September... View Obituary & Service Information

The family of LORRAINA RACQUEL " RAINA" TORRES-DINDO created this Life Tributes page to make it easy to share your memories.