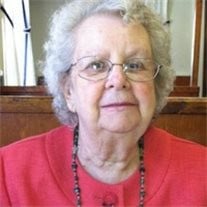 Bradford, VTLurlene Flora Walling Hurlbert, age 85, of Bradford, Vermont passed away June 4, 2018.She was born May 26, 1933 in Lancaster, NH to William G and Ruby Bessette Walling. At age 13 the family moved from Guildhall, VT to Bradford, VT. Lurlene graduated from Bradford Academy.She served in the Women's Air Force as A2C stationed at Parks Air Force Base, California during the Korean War stateside. She returned to Bradford and was married to and divorced from Lawrence Hurlbert. Lurlene worked 48 years at the Bradford National Bank and Merchants Bank. She was proof reader for the Bradford Journal Opinion during the late 50's and early 60's.She was an active member of the Bradford United Church of Christ. She served over the years on several committees to include Treasurer of the Women's Fellowship, Treasurer of the Service Club, Church Treasurer as well as past Deaconess. Lurlene was a past Bradford Library Treasurer as well as past Trustee. Lurlene also was part of Dr. Oschey office staff serving in payroll duties. She worked over many years serving the public in many local businesses and individuals balancing their bank accounts and statements.Lurlene worked on church fundraisers for local causes, co-chairing events and was known for her fudge and jams in church bazaars and was a longtime volunteer working on the church Wild Game Supper.Lurlene being a quilter was involved in several quilting projects for the ABC program for ill children and Camp Agape Project Linus for children with incarcerated parents.Survivors include Sister Barbara Walling of Newport, VT, Daughters, Debra Kleeman and her husband Richard of Sudbury, MA, Jody Stygles and her husband Arnold of Bradford, VT, Pamela Kelsea and her husband Richard of Ashby, MA, her son, Scott Hurlbert and his wife Shelia of Lisbon, NH. She will also be missed by her nine grandchildren, two step grandchildren, eight great grandchildren, three step great grandchildren and her one nephew and many cousins.Lurlene is predeceased by her parents, a brother Bernard Walling, a sister Leona Goss, and a niece Suzanne Mackay.Lurlene's greatest love was her family that she was so proud of. She enjoyed family gatherings, her community involvement for various volunteer projects, yard sales and her quilting, sewing projects and was an avid reader.A Memorial Service will be held at 1:00pm Saturday, June 16 at the Bradford United Church of Christ, Main Street, Bradford, VT. A reception will be held in the church vestry following the burial at Sawyer Cemetery in Bradford.Calling hours will be held from 6:00pm to 8:00pm Friday evening, June 15 at Hale Funeral Home, 187 Upper Plain, Bradford.In lieu of flowers donations may be made to the Bradford United Church of Christ, PO Box 387, Bradford, VT 05033 and the Bradford Library, PO Box 619, Bradford, VT 05033. Online guestbook at www.halefuneralhomes.com.The family wishes to acknowledge the staff of the Francis Atkinson Residence which was home for Lurlene for the past five years. We appreciate the loving gentle care for our mother and the kindness to the family. To plant Memorial Trees in memory of Lurlene F. Hurlbert, please click here to visit our Sympathy Store.

The family of Lurlene F. Hurlbert created this Life Tributes page to make it easy to share your memories.

Send flowers to the Hurlbert family.