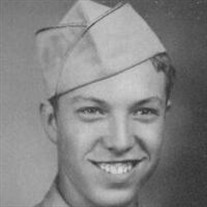 Corinth, VT- Lyle Hartley Eastman, 87 of Corinth, VT, went to be with our Lord on April 10, 2014 at Dartmouth Medical Center in Lebanon, NH. He was born December 17, 1926 in Pike Hill, Corinth, VT. The Pike Hill Mines was a place that he fondly revisited and reminisced the old days with his family, throughout his years in Corinth.Lyle was a loving husband, father and grandfather and continuously made us all laugh with his colorful sense of humor. He was very proud of the time he served in the U.S. Army as a Corporal, stationed at Fort Dix, New Jersey until he was discharged with honors on November 6, 1946. He worked for Bowen Hunters in East Corinth, Veneer Mill in Bradford and Rock of Ages in Barre, where he retired in 1987.He was a member and Deacon of the Corinth Bible Church in Corinth Center, a member of the American Legion and also volunteered many years as a fireman for the East Corinth fire department. In his earlier years he enjoyed gardening, fishing, hunting and camping. Later in life he became known as the wood maker of those brightly painted whirly gigs, that he enjoyed making in his garage on Taplin Hill. He loved gold panning and searching the area for treasures ( a coin, or just a rusty nail) he found with his metal detector. He enjoyed his yearly visits to local area cemetery's visiting with passed family and friends.He is survived by his wife of 65 years, Shirley Eastman of Corinth, a son Larry Eastman and wife Cynthia of Corinth, 2 daughters, Dianna Hayward and husband Philip of Corinth and Dawna Fox of Topsham. A sister Gwendolyn Claflin and Husband Edward of Ryegate. A sister in law Gail Eastman from Pike, NH, 7 grandchildren, 7 great-grandchildren and 1 great-great grandchild.He was predeceased by his father and mother, David and Bertha Eastman, 2 brothers Earl and Reginald (Dean) Eastman, 3 sisters, Lillian Martin, Helen Eastman, and baby Bernice that died at birth.At request of the family, there will be no calling hours. Funeral service will be held Tuesday, April 15th at 1:00 at Hales Funeral Home. Burial will take place at the family's discretion in the spring at the Corinth Center Cemetery.Hale Funeral Home in Bradford is in charge of arrangements.To view an online guest book go to www.halefuneralhomes.com To plant Memorial Trees in memory of Lyle Hartley Eastman, please click here to visit our Sympathy Store.

Corinth, VT- Lyle Hartley Eastman, 87 of Corinth, VT, went to be with our Lord on April 10, 2014 at Dartmouth Medical Center in Lebanon, NH. He was born December 17, 1926 in Pike Hill, Corinth, VT. The Pike Hill Mines was a place that he fondly... View Obituary & Service Information

The family of Lyle Hartley Eastman created this Life Tributes page to make it easy to share your memories.

Send flowers to the Eastman family.