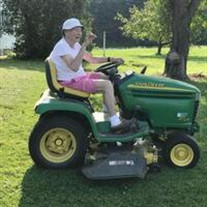 Bradford, VT- Marcia E. Pierce, 91, of Lower Plain in Bradford, VT died Tuesday, March 3, 2020 at Dartmouth Hitchcock Medical Center in Lebanon, NH.She was born August 20, 1928 in Hanover, NH the daughter of George T. McClellan and Ethel F. (Sawyer) McClellan.She was married to Frank Pierce who predeceased her.Mrs. Pierce was a nurse at Mary Hitchcock Memorial Hospital for more than 30 years, retiring in 1990. She enjoyed mowing her lawn on her John Deere tractor, and looked forward to planting flowers each spring and decorating her front porch for all to see. Marcia loved to be outdoors and spent hours sitting on her front porch watching the humming birds. When she was younger, she enjoyed going to Smith's Auctions with her best friend, Joan Newkirk.Marcia had a heart of gold and always told you like it was. She wasn't opposed to sneaking ice cream for dinner and enjoyed tea time with another best friend, Virginia Crowe. Marcia looked forward to picking strawberries at Pierson's Farm each summer and would frequent the farm stand during the summer months. She took pride in her home and always said that Bradford, VT was her "home."Survivors include a brother, Paul McClellan of Keene, NH, nieces, Kristie McClellan Tourgee and Dawn McClellan, both of Keene, NH, a nephew, Chandler McClellan and his wife, Debbie of Wyoming, and a step-son, Brad Pierce of Hingham, MA.Services will be at the convenience of the family in the spring. There are no calling hours. Hale Funeral Home of Bradford, VT is in charge of arrangements. To plant Memorial Trees in memory of Marcia E (McClellan) Pierce, please click here to visit our Sympathy Store.

The family of Marcia E (McClellan) Pierce created this Life Tributes page to make it easy to share your memories.