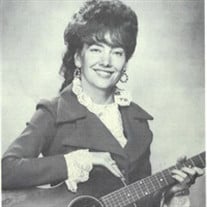 LYME, NH - Margaret Lorraine (Reeves) Miller passed away surrounded by her family at Hanover Terrace on July 11, 2018. Maggie was born on July 30, 1937, in Mars Hill, Maine, the daughter of Otto and Rose (Raymond) Reeves.Maggie was one of ten children. She lived in each of the New England States while growing up. She moved to Lyme in 1952 and attended Orford High School, where she enjoyed playing sports and was Prom Queen. She married her high school sweetheart, Caryl Miller, and lived with him on base after he returned from serving in Korea. Upon Caryl's completion of serving in the Army, Maggie and Caryl made their home in Lyme, where they lived for 27 years before divorcing.Maggie was a country music performer; singing and playing with her band, Maggie Miller and the Mystics for many years, and in later years formed the Whipple Hill Gang. She was awarded Top Country Female Vocalist of the Northeast in 1972, and received her trophy when performing in Wheeling, West Virginia. Over the years, she played with celebrities including Mac Wiseman and Dick Curliss, and local talent including her brothers, Leroy and Dick. She hosted a weekly TV program in the late 1960's broadcast out of White River Junction, which showcased local talent.Maggie loved Elvis, horses, country music, and her robin's egg blue 78 Mustang. She enjoyed raspberry pie, dill pickles, and playing mini golf and cards with friends Joe and Rose Hutchins or Tot and Charlie Rutledge. Maggie's pets were very special to her. Over the years she owned two horses, and a number of dogs, whom especially in later years, were each treated as a best companion.Maggie was a hard worker, and was proud of her ability to work two jobs for many years. She worked over a decade at Hanover Graphics, Split Ball Bearing/Timken, and eventually retired from Unifirst. When performing wasn't her second job, she worked at various print shops, and as a bank teller. She was forced to retire before her goal of age 70, due to sustained injuries from a car accident, but enjoyed her retirement to its fullest.Maggie was especially close to her sister Jackie. She had a great sense of humor, and was always ready to do anything fun. She enjoyed fashion, and frequently gave input to her mother in law, Martha Miller, who handmade several of her stage outfits, including unique, fancy jumpsuits (patterned after Elvis's).Maggie is survived by her daughter, Wanda Clark and her husband John of White River Jct., VT, her older sister Jacqueline Digby of Rhode Island, and brother Bill and wife Debi of Lyme, several nieces and nephews, and some truly great friends including Jim and Ruth Strout, band member Ron Howard, her best friend, Gary Purington, and too many more to mention.There will be a private family graveside service in accordance with her wishes. Memorial contributions may be made to Bayada Hospice, 316 Main Street, Unit EH-6, Norwich, VT 05055. To plant Memorial Trees in memory of Margaret Lorraine (Reeves) Miller, please click here to visit our Sympathy Store.

LYME, NH - Margaret Lorraine (Reeves) Miller passed away surrounded by her family at Hanover Terrace on July 11, 2018. Maggie was born on July 30, 1937, in Mars Hill, Maine, the daughter of Otto and Rose (Raymond) Reeves.Maggie was one of ten... View Obituary & Service Information

The family of Margaret Lorraine (Reeves) Miller created this Life Tributes page to make it easy to share your memories.