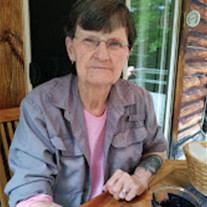 Bradford VT. Marilyn Jean Whitehead, 74, passed away at her home in Bradford, Vermont on August 8, 2021 surrounded by the love of her family and friends. Marilyn’s courageous fourteen-year battle with Stage 4 Lung Cancer was an inspiration for all who knew her. She was born in Nyack, New York on November 10, 1946 to Dorothy and Frederick Whitehead. After high school in 1965, at the height of the Viet Nam war, Marilyn volunteered for and entered the Navy where she was assigned to the National Weather Environmental Service in Corpus Christi, Texas. Meteorology became a lifelong interest of hers. She received a Bachelor of Arts degree from Empire State College, University of New York in 1973. From New York, she traveled to Alaska where she worked for a season in the Bering Sea aboard a commercial fishing vessel. She loved to tell tales of her experiences “cracking crab” off the coast of Acutan. In 1980, she met the love of her life in Provincetown, Massachusetts. She and Judith soon moved to Boston together where Marilyn trained as a laboratory technician. They bought land in Bradford, VT in 1987. Students at Oxbow High School, class of 1988, built their log home for them as their class project. Marilyn worked at Dartmouth Hitchcock Medical Center as a laboratory technician from 1988 until her diagnosis of cancer at age 60.   Judith and she celebrated their union with friends and family in an informal ceremony in 2006 but were married when it became legal at the Bradford Town Hall in 2014. Marilyn loved her job, her home, helping others, women in science, all God’s creatures, the planet, Star Trek and chocolate ice cream. She is survived by her wife, Judith Beckett, of Bradford, VT; her daughter and son-in-law, Phebe and Gaetano Quattrucci of South Freeport, ME; her granddaughter Tessa Quattrucci also of South Freeport; and her grandson, Dylan Morse, of Ithaca, New York; her sister-in-law Gail Musson of Edgecomb, ME; four nieces and nephews, two great nephews and a great niece. DUE TO COVID-19 CONCERNS THE GATHERING SCHEDULED FOR OCT. 3 HASW BEEN CANCELLED. PLEASE REMEMBER MARILYN THAT DAY WITH SOME REFLECTIVE MOMENTS, AND ACT OF KINDNESS AND/OR A RAISED GLASS. Donations in her name to local animal shelters or any organization dedicated to helping animals, the ocean and our planet would please her. Her bright spirit will be missed. Hale Funeral Home has been entrusted with the care of Marilyn.   To plant Memorial Trees in memory of Marilyn Jean Whitehead, please click here to visit our Sympathy Store.

Bradford VT. Marilyn Jean Whitehead, 74, passed away at her home in Bradford, Vermont on August 8, 2021 surrounded by the love of her family and friends. Marilyn&#8217;s courageous fourteen-year battle with Stage 4 Lung Cancer was an inspiration... View Obituary & Service Information

The family of Marilyn Jean Whitehead created this Life Tributes page to make it easy to share your memories.

Bradford VT. Marilyn Jean Whitehead, 74, passed away at her home...

Send flowers to the Whitehead family.