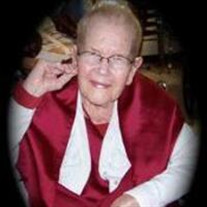 Mary Cason Brockardt, 87, of Topsham, VT, passed away peacefully surrounded by loved ones at Grafton County Nursing Home in North Haverhill, NH, on November 18, 2013. She lived there since 2007 and bravely fought her Parkinsonism with courage. She was a daughter of James I. and Margaret G. Cason. She grew up in Charleston, WV, and graduated from Randolph-Macon Woman's College in Lynchburg, VA, with the class of 1946. She was a member of Alpha Delta Pi sorority, and maintained many lifelong friendships that started in college. Shortly after her graduation, she married the love of her life, John W. Brockardt, of Wheeling, WV, on June 1, 1946. Together they raised four children, making various moves in the course of John's career with Union Carbide Corporation. They lived in West Virginia, Texas, Connecticut, New Jersey, and they retired to Topsham, VT, in 1980. She worked in various medical offices along the way; she had a successful real estate career, in both New Jersey and Vermont; she was a charter member of the Twin W First Aid squad in NJ; and she was an Amway distributor in both NJ and VT. Upon their retirement to Vermont, she found a new passion for play acting, and was in numerous play productions with the Tabor Valley Players. She also did substitute teaching at local schools in VT. She was very proud of the fact that she was not only a Daughter of the Confederacy, but also a Magna Carta Dame. She and John shared a passion for traveling and over the years, visited many countries and had a knack for never meeting a stranger. She had a strong faith and was an active member of the East Corinth Congregational Church, where she was a member of the Missions Committee and hosted numerous meetings while residing at the nursing home. She was predeceased by her parents, her sister, Margaret R. White, and her beloved husband of 46 years. She is survived by a son, John I. (Jane), of Marion, IA; a son, James W. (Barbara), of Pennington, NJ; a daughter, Mary "Mamie" (Barry) Powers, of Topsham, VT; and a daughter, Ann (Bennett) Bonomi, of Cooper City, FL. She was a loving grandmother to eight grandchildren: Maria, Matthew, Johanna, John, Sarah, Brian, Eric, and Kyle. She adored her four great-grandchildren: Quintin, Dyllan, Caitlyn and Austin. She shared a special affection with her nephew, Ralph "Sam" White, and Sarah's husband, Ron. She also leaves two nieces, Jane and Mary, and a nephew, David. Mary's family is deeply grateful for and appreciative of the loving and compassionate care that she received in her last weeks from the wonderful nursing staff on the Granite unit at the nursing home. We love you all. In lieu of flowers, please consider a memorial gift to: East Corinth Congregational Church, P.O. Box 1086, E. Corinth, VT 05040; Vermont Sunshine Society, c/o Susan Hastings, 241 Benton Rd, North Haverhill, NH 03774-4607; American Parkinson Disease Association, 135 Parkinson Avenue, Staten Island, NY 10305 - www.apdaparkinson.org. Calling hours will be held on Friday, November 22, 2013, from 5-8 p.m. at the Hale Funeral Home, 187 Upper Plain, Bradford, VT. Her funeral will be held on Saturday, November 23, 2013, at 1 p.m., at the East Corinth Congregational Church, with the Rev. Dr. C. Michael Caldwell officiating. Internment will immediately follow at the New Cemetery in East Corinth. To view an online obituary or send a message of condolence to the family, please visit www.halefuneralhomes.com. Arrangements are under the direction of Hale Funeral Home of Bradford, VT. To plant Memorial Trees in memory of Mary Cason Brockardt, please click here to visit our Sympathy Store.

Mary Cason Brockardt, 87, of Topsham, VT, passed away peacefully surrounded by loved ones at Grafton County Nursing Home in North Haverhill, NH, on November 18, 2013. She lived there since 2007 and bravely fought her Parkinsonism with courage.... View Obituary & Service Information

The family of Mary Cason Brockardt created this Life Tributes page to make it easy to share your memories.

Send flowers to the Brockardt family.