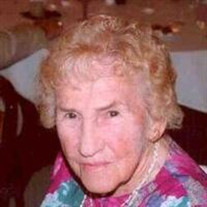 Newbury, Vt -Mary Elizabeth Newton Woodward, former resident of Newbury/East Corinth, VT passed away peacefully with loved ones at her side at the Green Mountain Nursing Home in Colchester, VT on Saturday, March 29, 2014 at the age of 98. She was born in Starksboro, VT on March 4, 1916 to the parents of Timothy and Anna Flint Newton.Mary attended schools in Starksboro and graduated from Bristol High School. After graduation she worked in East Corinth where she met and married Frank "Joe" Woodward on September 12, 1938. They lived in Maine for a short time and in 1945 returned to Vermont and raised eight children on the family farm near Wright's Mountain.Mary's life centered around her family and she especially enjoyed the family gatherings. Her many other enjoyments included playing cards, golfing, dancing, bowling, hunting, reading and gardening. As an avid golfer, she was a member of the Bradford Golf Course and the Lake Morey Country Club where she won the women's club championship twice. She was a long- time member of the Vermont State Women's Golf Association and played in state events for over fifty years. She was awarded the most improved golfer on more than one occasion by the VSWGA. Mary was also a member of a bowling team for several years and participated in a league at the Woodsville bowling alley in Woodsville, NH. After the death of her husband in 1987, she spent her winters in St. Petersburg, FL at Melody Gardens where she enjoyed numerous activities with her many friends. Mary truly thought of them as her second family.Survivors include: six sons, Frank "Joe" Woodward and wife Nancianne of Milton, VT, Michael Woodward of Georgetown, FL, Tim Woodward and wife Sukie Knight of West Newbury, VT, Keith Woodward and partner Pat Driscoll of Moscow, VT, Richard Woodward and wife Debbie of Antioch, CA, Robin Woodward and wife Kelly of Phoenix, AZ, and two daughters, Cheryl Hoar and husband Doug of Williston, VT, and Sheila Clairmont and husband Greg of Colchester, VT. Mary is also survived by over 50 grandchildren, great grandchildren, great, great grandchildren and many nieces and nephews. Mary was predeceased by her husband in 1987; four brothers, Guy, Wallace, Charles and Flint Newton; three sisters, Hazel Hunt, Ruth Manila and Gertrude Needham; daughter-in-law Lois Woodward; two grandchildren Scott Woodward and David Newton Woodward.Funeral services will be held at the Hale Funeral Home in Bradford, VT on Saturday, April 5, 2014. Calling hours will be from 11:00 to 12:30 with a service to follow. A gathering of friends and family will take place at the Happy Hour Restaurant in Wells River, VT following the service. There will be a celebration of our mother's life at a later date. In lieu of flowers contributions may be made to the American Cancer Society, 55 Day Lane, Williston, VT 05495.The Hale Funeral Home and Cremation Care of Bradford, VT is in charge of arrangements.To view an online guestbook go to www.halefuneralhomes.com. To plant Memorial Trees in memory of Mary Elizabeth Newton Woodward, please click here to visit our Sympathy Store.

Newbury, Vt -Mary Elizabeth Newton Woodward, former resident of Newbury/East Corinth, VT passed away peacefully with loved ones at her side at the Green Mountain Nursing Home in Colchester, VT on Saturday, March 29, 2014 at the age of 98. She... View Obituary & Service Information

The family of Mary Elizabeth Newton Woodward created this Life Tributes page to make it easy to share your memories.