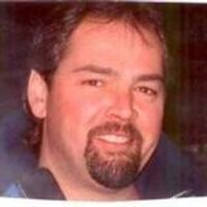 Bradford, VT-Michael A. Erwin, 44, of Bradford, VT suddenly passed away Friday April 13th 2012. He was born in Woodsville, NH on August 26th 1967, the son of Wayne and Margaret (Coleman) Erwin. He attended Bradford Elementary and graduated from Oxbow High School in 1985 where he completed two years in the Building Trades program. After high school, Mike began expressing his creativity through carpentry and bodywork. He worked for various building contractors in the area, later, using his experience to remodel the Erwin family barn into his unique and beautiful home. The homes of many friends and neighbors have the touch of Mike's handiwork. At his residence he owned and operated Mike's Auto Body, his latest project being the restoration of a 1976 F250 Ford Pickup. Recently, Mike had been focusing his attention on designing and building furniture out of wood. Mike was a hard worker but took the time to enjoy several activities including; fishing, hunting, four-wheeling, snowmobiling, and camping. But, before any of this, Mike made time for family and friends. He was a true friend and a loyal brother; always willing to lend a hand when anyone needed help. He loved his kids more than anything and showed his parents lots of love and respect. Mike was loved by all and will be forever in our hearts. Mike is survived by his parents Wayne and Margaret Erwin (Bradford, VT), his children Kaelea Monahan and Cody Erwin (Piermont, NH), his brother James Erwin (Bradford, VT), his sister Lynda and her husband Edward Lane (Vershire, VT), nieces Lacey and Jenna Erwin (Tampa, FL), sister-in-law Buffy Thurston, nephew Daniel and his wife Kellie Jean Thurston, nephew Davis Thurston (Andover, NH) as well as many aunts, uncles and cousins. He was predeceased by one brother David Thurston. He's also survived by his beloved dog, Chase. A Memorial Service will be held at the Corinth Bible Church, Center Hill, Corinth, VT on May 5th at 11AM. Following the service there will be a celebration of Mike's life at his parent's home at 274 Wayne Hill Rd Bradford, VT. Anyone who would like to bring photos and memories to share are encouraged to do so. In lieu of flowers donations may be made to the Michael Erwin Memorial Fund at Wells River Savings Bank P.O box 367 Bradford, VT 05033. The Hale Funeral Home of Bradford, VT is in charge of arrangements. To plant Memorial Trees in memory of Michael A Erwin, please click here to visit our Sympathy Store.

Bradford, VT-Michael A. Erwin, 44, of Bradford, VT suddenly passed away Friday April 13th 2012. He was born in Woodsville, NH on August 26th 1967, the son of Wayne and Margaret (Coleman) Erwin. He attended Bradford Elementary and graduated from... View Obituary & Service Information

The family of Michael A Erwin created this Life Tributes page to make it easy to share your memories.

Send flowers to the Erwin family.