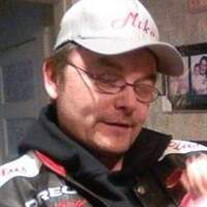 South Ryegate, VT-Michael Alvah Smith, aka Mimi, 52, died at Dartmouth Hitchcock Medical Center on May 3, 2021, after a short illness.He was born October 12, 1968 in Berlin, VT the son of Alvah Smith and Betty Spooner. Michael graduated from Oxbow High School in 1986 and went on to work at several jobs, including Malden Mills, Bombardier, and most recently the Vermont State Hospital.Michael had a love of muscle cars, music (especially metal) and sports. He especially loved watching NASCAR, and Jeff Gordon was his absolute favorite. He also loved watching Boston sports teams, and was a diehard Patriots fan. As with everything in life, he was passionate about each of these things, and would have a heated debate with anyone who said anything negative.The thing Michael was most passionate about was his family. He loved his siblings, but it was his nieces and nephews that he had a soft spot for. He was an integral part of their childhoods, and this continued with his great-nieces and great-nephews, and even children who were not blood related. He was Uncle Mimi to so many, even before he adopted the nickname. He would drop anything he was doing to help them. He always had a hug and made everything fun. He had a love of music and would share this, whether just listening to it, or singing to and with you. He would dance, he would use goofy voices, there's nothing he wouldn't do to bring a smile.Michael was predeceased by his father, Alvah Smith, his mother, Betty Armour (nee Spooner), and his beloved sister whom he missed dearly, Laurie Williams (nee Smith), and many beloved aunts (especially Barbara Smith), and uncles.Survivors include his sister, Darlene Chicoine and her husband, Roland of Millis, MA, sister, Beverly Ordway and husband, Bruce of West Topsham, VT, brother, Dale Smith of Elmore, VT, brother, Brian Smith and his special friend, Jen Thompson of East Topsham, VT, and Jeremy Smith and partner, Erin Finneran of East Topsham, VT, many nieces, nephews, great-nieces and great-nephews and cousins, who will miss him dearly.The family wishes to extend a special thank you to the staff at the ICU Department at Dartmouth Hitchcock Medical Center for providing wonderful care to Michael, and kindness to his visiting family. There will be no calling hours. A private graveside service for close family and friends will take place at a later date. Arrangements are by Hale Funeral Home in Bradford, VT. To plant Memorial Trees in memory of Michael A. Smith, please click here to visit our Sympathy Store.

South Ryegate, VT-Michael Alvah Smith, aka Mimi, 52, died at Dartmouth Hitchcock Medical Center on May 3, 2021, after a short illness.He was born October 12, 1968 in Berlin, VT the son of Alvah Smith and Betty Spooner. Michael graduated from... View Obituary & Service Information

The family of Michael A. Smith created this Life Tributes page to make it easy to share your memories.