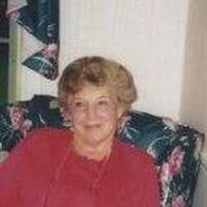 A Life filled with love for her Family and extended family ended October 23, 2014 when Natalie passed away at the Berlin Health and Rehab Center in Barre, Vt with her husband, Chester Allen, at her side as he has been for the last 28 years. Natalie was born and raised in Bradford living near the library. She loved playing basketball in High School at Bradford Academy and was proud that she was considered quite an athlete. At 17, Nat married Bryce Metcalf and moved to Taplin Hill in East Corinth where they raised their 5 children and farmed for more than 40 years. Nat not only worked in the barn and fields side by side with Bryce while raising 5 kids all born within 7 years of each other; she also baked pies, cookies, cakes, rolls and bread every week for her family and was an excellent cook. Natalie enjoyed sewing and reading and dancing Saturday nights with her group of friends and listening to big band music. She also liked a good game of Scrabble. Raising children didn't end with her five children. The Grandchildren arrived and Nat had an integral part in their lives as well, especially Suzette and Gary Hayward who spent many weekends on the farm growing up and working and learning from their Grandparents. She made lap quilts for each of her Grandchildren when they were grown and birth announcement quilts for each Great- Grandchild. In the 80's Natalie and Bryce divorced, the Farm was Sold, the children grown, Nat moved to Florida to live with her Mother-in-Law, Ethel, for a short time. Her next phase of life began with her relationship and Marriage to Chester Allen of Bradford. Chester and his Children and Grandchildren and extended family were a true Blessing to Nat. She adored all of them, but especially Chet. Nat and Chet lived in Bradford for a few years and ran a trucking business and then retired to Myrtle Beach, NC and later to Leesburg, Florida. Natalie took up Golf which became her favorite sport. She golfed year round living in the South and at the course in Bradford when home in the summer. Natalie's health started to decline from a neurological disorder at 80. She and Chet moved back to Vermont and lived in W. Topsham in Chester's childhood family home. Chet became Nat's sole care provider for many years until she fell, at which time she became a resident of Berlin Health & Rehab for the last 2 years of her life. Chet visited Nat every day and then he too became a resident there during the last 6 months of her life. He was with her to the end. Natalie is survived by her husband of 24 years, Chester Allen, her Children, Becky Hayward and partner, Bruce Millette of Fairlee Vt, a Daughter, Cindy Spellane and husband, John of Holden MA, sons William Metcalf of Oakland Park Fl and Bryce Metcalf of Ferndale WA, Chet's Children: Jeanne Gallerani and husband Peter of Danville, Stephanie Rowe and husband Alan of St. Johnsbury, Douglas Allen and wife Janet of E. Montpelier. She also leaves Pamela Owen Johnson of Bradford, who was like another Daughter to Natalie and best friend to her Daughters. Natalie leaves 13 Grand Children: Gary Hayward Jr, Stephanie Adams, Matthew Munn, Sarah, Mark & Michael Sadowski, Liz Davis, Justin, Julia & Hannah Rowe, Sarah & Zachary Allen, & Nicholas Gallerani; 17 Great Grandchildren and 2 Great - Great Grandchildren. Nat leaves her Brother Dale Wright and wife Ralene of Ryegate, Sisters-in-law Vilma Wright of Groton, Eris Eastman of Bradford and Vida Perry Munson of Bradford and many Nieces and Nephews whom she loved dearly. She was predeceased by her Daughter Mary Munn, her Granddaughter Suzette Hayward Pratt, her Brother Lloyd Wright and her Sister Norma Lavoie. A Celebration of Life will be held at a future date. Arrangements have not been made. Memorial Donations can be made to the Bradford Public Library PO Box 619, Bradford VT 05033 in Memory of Natalie's love of Reading. The Hale Funeral Home and cremation Care of Bradford, VT is in charge of arrangements. To view an online guestbook go to www.halefuneralhomes.com To plant Memorial Trees in memory of Natalie Ottobelle Wight Metcalf Allen, please click here to visit our Sympathy Store.

A Life filled with love for her Family and extended family ended October 23, 2014 when Natalie passed away at the Berlin Health and Rehab Center in Barre, Vt with her husband, Chester Allen, at her side as he has been for the last 28 years.... View Obituary & Service Information

The family of Natalie Ottobelle Wight Metcalf Allen created this Life Tributes page to make it easy to share your memories.

A Life filled with love for her Family and extended family ended...