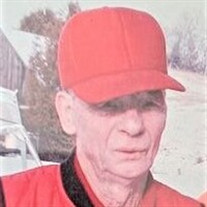 East Corinth, VT-Neil Perry Young, 89, of East Corinth died peacefully at home on April 20, 2021.Neil was born April 22, 1931 on the old "Perry Place" in West Topsham, VT the son of Charles and Mildred (Sweet) Young. He attended the East Corinth Graded School for four years, then moved to upstate New York for a short time. He finished grade school in Bristol, CT. He lived with his much-loved Aunt Della and Uncle Charlie at the Inn on Lake Warmog while finishing high school in New Milford, CT. He spoke often of all the arrowheads he discovered there. He came back home and lived with "Mother T" until he married. During this time, Neil enjoyed acting in the home talent plays. He served in Germany as a radio operator during the Korean War. As a young man, Neil worked at Bowen-Hunters Bobbin Mill in East Corinth for several years, then moved to Dixie Bobbin Co. in Barre, VT. He also worked at the Wells and Lamson Quarry, in the granite sheds, and started Vermont Hydraulics in East Corinth.Neil was a dedicated member of the East Corinth Volunteer Fire Department for 25 years from 1954-1979. He served as chief for 18 of those years, and was a major organizer for the building of the first fire house in East Corinth. It was his pride and joy. He was involved with the up-keep of The Valley Health Center.He was married to Louise (McKay) Young for 64 years and they made many happy memories with family and friends. They enjoyed picnicking, lining bees with their young daughters, berry picking, gardening, and years of square dancing, where they made lots of very special friends. They loved the time spent with Ben and Michael.Neil loved the outdoors-hunting, fishing, trapping, digging ginseng, and spotting deer sheds while walking in the woods. He always kept a few beehives. He loved country music, played the harmonica and a little guitar. He was always happy to lend a helping hand, and generous with his advice on a variety of topics. He was proud to call so many people his friends.Survivors include his wife, Louise, daughter, Nan and her husband, John, grandsons, Michael Bottiggi, and Ben Whiting and finance, Emily Bruchner, Nelson and Debbie Tillotson, honorary grandchildren, Terri Tillotson, Lee Tillotson and family, cousin, Paula Jewell, brother-in-law, Dunc McKay and his wife, Judy, niece, Kathy Lamson, and husband, Albert and family, nephews, Angie Decrisantis, and wife, Joan, and family, Joe Kelita, wife Cheryl, and family, Michael and Debbie Iaia, and other nieces, nephews, cousins, friends, and neighbors.Neil was predeceased by his daughter and son-in-law, Joany and Larry Whiting, and nephew, Duncan McKay Jr. Neil was also predeceased by his parents and sisters.Neil and his family are very grateful to the wonderful people at Caring Hands and Hospice that made it possible for him to stay at home.A graveside service will be held at a later date. In lieu of flowers, please feel free to donate to the Larry and Joany Whiting Memorial Forestry Scholarship, in care of Nan Young, 3638 Willoughby Lake Road, Barton, VT 05822, or to Northeast Slopes, in care of Wade Pierson, P.O. Box 213, East Corinth, VT 05040, or to the East Corinth Fire Department, for turnout gear, Mike Pittman, 88 Miller Road, Corinth, VT 05039. Arrangements are by Hale Funeral Home in Bradford, VT. To plant Memorial Trees in memory of Neil P. Young, please click here to visit our Sympathy Store.

The family of Neil P. Young created this Life Tributes page to make it easy to share your memories.