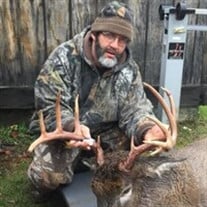 West Topsham, VT-Norman Dean Perry, 52, passed away unexpectedly on March 15, 2020.He was born August 9, 1967 at Central Vermont Hospital in Berlin, VT, to Marie Huntington Bruleigh (step-son of Micky Bruleigh) and biological son of Rodney Perry.He was raised by his step-father and mentor, Micky Bruleigh, who taught him to love the outdoors by hunting, fishing, fixing fence, and cutting and splitting wood by hand. He was an avid hunter and fisherman. He loved horseshoes and played in the Barre Leagues and the Connecticut Valley Horseshoe League. He looked forward each year to the North Haverhill Fair horseshoe tournament.His love for hunting made him very successful in harvesting 13 buck deer in his life. With the ability of playing horseshoes, he was able to bring home many trophies and representation of the sport in first or second place. He also loved watching racing at Bear Ridge Speedway every Saturday night. Norman loved NASCAR, always a fan of #3 and #88. He was a huge sports fan who loved football season and the Dallas Cowboys. When baseball season came around, the New York Yankees were at the top of his scoreboard.Norman's home was very important to him, where he spent a lot of time landscaping with trees and stones. He kept an impeccable lawn and garden. Along with his four-legged best friend "Gunnar" (the chocolate lab), they would go for walks, four-wheeling, snowmobiling and blackberry picking when Loretta was allowed to join them.He worked for Johnson Lumber Co., of Bradford, VT, as a stone cutter at Rouleau Granite Co., of Barre, VT, Limlaw Chipping and Land Clearing where he was impeccable in wood forest harvestry as a skidder operator and wood loader/slasher operator, and at Limlaw Family Maple Farm which complimented his love for the outdoors by tapping trees, gathering sap, and then un-tapping trees and cleaning up at the end of the sugar season.He attended Union 36 Elementary School, and graduated Oxbow High School, Class of 1985, where he met his wife of 31 years, Loretta Lynn Limlaw-Perry. They made a life and built their home in West Topsham, VT. They had one daughter, Lauria Chelsea Lynn Perry Poliquin, who then blessed them with a wonderful son-in-law, Grant Poliquin and a two-year-old grandson, Reid Norman Poliquin.He is survived by his wife, daughter, son-in-law, grandson, and mother and father-in-laws, Ruth and Bruce Limlaw; brother-in-laws Gene Limlaw and Dale Gurney, and Bryce Limlaw and wife Kyle; and close niece Olivia Limlaw and nephew Gabriel Limlaw; his mother and father, sister, Lisa Perry, brother Dennis Perry; and aunts, uncles, nieces, nephews and cousins.He was predeceased by his step-father, Micky Bruleigh, Kenneth and Berdina Perry, Warren Sr. and Evelyn Huntington, uncle Warren Huntington Jr., and nephew Cody Perry.Norman will be sadly missed. There are no calling hours. A Celebration of Life will be held at a later date. Arrangements are by Hale Funeral Home in Bradford, VT. To plant Memorial Trees in memory of Norman Dean Perry, please click here to visit our Sympathy Store.

The family of Norman Dean Perry created this Life Tributes page to make it easy to share your memories.