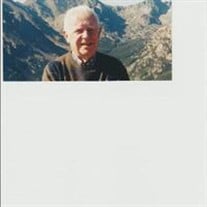 Norman Francis Surprenant, 93, passed away on May 1, 2020 at Wheelock Terrace Assisted Living Community in Hanover, NH. Norman was born December 4, 1926 in Fall River, MA. He was the oldest son of Francis X. and Bertha Ann (Kennedy) Surprenant, who resided in Newport, RI at the time of his birth.Norman graduated from Rogers High School in Newport, RI in 1944. He served with the United States Army Air Force from 1945 to 1946. He graduated from the Massachusetts Institute of Technology in 1949 with a degree in Chemical Engineering. He was employed as a Chemical Engineer with Arthur D. Little, Inc. in Cambridge, MA from 1950 to 1966. A highlight of his career was a research trip to Iceland to study Surtsey, a newly formed volcanic island. He thereafter worked for a number of consulting firms in MA, including Brunswick Corp, GCA Corp, and ENSR, Inc., focusing on the development of pollution control technology related to chemical and petroleum emissions. During his last year and a half he was an active and involved part of the Wheelock Terrace Assisted Living Community, receiving exemplary care and support.Norman retired in 1993, and returned to Newport. He enjoyed spending time with his many friends and relatives in the Newport area, and visits from family and friends from afar. He benefitted from the hospitality of his niece Nancy Young and her husband Frank Young of Newport, RI. He spent many hours at the Redwood Library and the Newport Public Library. He loved to travel. His many trips included treks to Alaska, the Yukon Territory, Britain, Scotland, and Ireland, New Zealand, Labrador, Vancouver and many destinations in the United States.Norman is survived by three daughters: Beth Gaetz of Corinth, VT, Ann Surprenant of Orono, ME and Frances Selkirk and her husband Paul of North Reading, MA; seven grandchildren: Glenn K. Gaetz and his wife Joanne Chang of Vancouver, BC, Joshua Gaetz and his wife Shannon of Corinth, VT, Jedidiah Gaetz of Sleepy Hollow, NY, Joseph Gaetz of Philadelphia, PA, John Robinson of Orono, ME, Paul Robinson of Halifax, Nova Scotia, and Kylie Selkirk of North Reading, MA; five great-grandchildren: Gabriel and Alexis Gaetz, Jonah and Margot Gaetz, and Simone Chang-Gaetz; sister-in-law, Elizabeth Surprenant of Newport, RI, and several nieces and nephews, grand nieces and nephews. He was pre-deceased by his ex-wife, Mary (Kirk) Surprenant of Orono, ME, his sister Kathryn Butterworth and her husband Arthur Butterworth of Bonifay, FL, his brother Raymond Surprenant of Newport, RI and his sons-in-law, Brian Robinson of Orono, ME and Glenn W. Gaetz of Corinth, VT.The funeral will be private. Arrangements are by Hale Funeral Home in Bradford, VT. To plant Memorial Trees in memory of Norman Francis Surprenant, please click here to visit our Sympathy Store.

The family of Norman Francis Surprenant created this Life Tributes page to make it easy to share your memories.

Send flowers to the Surprenant family.