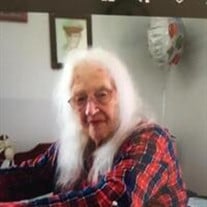 Olis Thurston, 95, of Corinth died Friday, October 18, 2019 at Bradford Oasis in Bradford, VT.She was born June 24, 1924 in Corinth, VT the daughter of Fred Claflin and Vera (Munroe) Claflin. On August 4, 1945 she married Clarence Thurston in Corinth, VT.She attended schools in Corinth. After her schooling, she was employed at Lake Morey Inn, Bonnie Oaks, the Bradford Motel, and at Three Chimneys in Orford, NH. She also worked at various camps on Lake Morey and Lake Fairlee, and for many private individuals in the area.Olis loved animals, especially horses, cats and pigs. She was a member of the Central Vermont Humane Society, and donated to the Corinth Animal Rescue. She was an excellent cook and famous for her homemade chocolates and ice cream.Survivors include her husband, Clarence Thurston at Barre Gardens in Barre, VT, one son, Sidney Thurston of Corinth, VT, two daughters, Sidonie MacRitchie of Montpelier, VT and Fleeta Thurston of Fairlee, VT, one step-son, Burton (Harriet) Valliant of Beloit, IL, numerous grandchildren and great-grandchildren, nieces and nephews, one sister, Junis (Mahlon) Thurston of Bradford, VT, two brothers, John (Juanita) Claflin of Ocala, FL and Ralph (Mary) Claflin of Orange, VT, a sister-in-law, Diane Claflin of Corinth, VT and a life-long friend, Betty Sarazin of Corinth, VT.She was predeceased by two sons, Roberto and Armon Thurston, a daughter, Zelta Corliss, one brother, Franklin Claflin, one sister, Olive Eggleston, and a brother-in-law, Norman Thurston.Graveside funeral services will be held on Wednesday, October 23, 2019 at 10 am in the East Corinth New Cemetery. In lieu of flowers, donations in her memory may be made to local animal rescue groups and humane societies. Arrangements are by Hale Funeral Home in Bradford, VT. To plant Memorial Trees in memory of Olis Thurston, please click here to visit our Sympathy Store.

The family of Olis Thurston created this Life Tributes page to make it easy to share your memories.