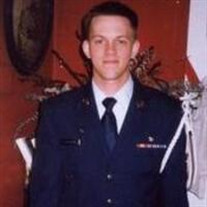 Patrick Wm. Tomlinson USAF Airman Patrick Tomlinson, son of Gary Tomlinson of Alexandria, NH and Marcia (McCormick) Tomlinson of Bradford, VT, died at home in North Las Vegas, NV. Born in Lebanon, NH Nov. 15, 1987 Patrick was raised in Bradford, VT, where he was an active member of the Cub Scouts, Webelos, receiving the Order of the Arrow, and then the Boy Scouts, reaching the rank of Life Scout. Going first as a participant and then as an Assistant Leader, Patrick attended the Green Mountain Council's Mount Norris "Frontier Camp" for six years where his bestowed title was "Crazy Turtle." His was always the teepee with the carved turtle hanging on front. Patrick's first visit to the Bradford Congregational Church was when he was just five days old and final preparations were underway for the annual Game Supper. An unofficial helper until he was ten years old, Patrick grew up working on the Game Supper in a variety of positions. He especially enjoyed picking up and delivering back to the church the huge rabbit pies as they came out of private ovens around town. During his years in the Church he was an active member of the Sunday School, the Junior Choir, and the Youth Group. After confirmation and becoming a full member of the congregation Patrick served as an usher, thoroughly delighting in giving his arm to the many ladies as he would escort them to their pews. In his senior year of high school he served as Chairman of the Ushers Committee, the youngest member to ever hold the position. He was also very active in the community, especially for the Bradford Regional Community Center where he was an active member of the Boys and Girls Club. Once in High School Patrick became a member of the church's Senior Choir and although he sang quietly he did have a lovely baritone voice. During this same time he took up the acoustic guitar and, largely self-taught, began to develop his own personal style and amassing a library full of guitar tabs and sheet music. Patrick was also self-taught on the piano as well as how to tune the family baby grand by use of his lap top and his guitar pick. From a very early age Patrick loved to take apart any mechanical or electrical device in order to see how and why it worked, and as he grew older it was amazing how he could fix almost everything, often reassembling devices leaving out parts he proved were unnecessary. His true mechanical love, however was not in gadgets like radios and televisions and telephones, but in cars. He was never without a Camaro in need of restoration during high school, each time utterly amazing everyone when he would piece by piece restore it. Upon graduation from Oxbow Patrick went to Universal Technical Institute to study automotive science. After UTI he enlisted into the Air Force in 2008 and after Basic Training attended Technical School at Sheppard Air Force Base in Texas where le learned the initial skills required for a Health Services Management Technician. Followed this training he was assigned to Nellis Air Force Base in Nevada for his first duty assignment: Patient Administration Flight, 99th Medical Support Squadron, 99th Medical Group. It was at Nellis AFB he also found himself another car in need of restoration. When Patrick was the only volunteer for a special duty his unit Commander presented him with the Commander's Challenge Coin, a high honor. With his love of creative design, he designed a new coin which the Commander liked so much he showed it to other officers, who in turn asked Patrick to design theirs. An Airman Tomlinson designed challenge coin became a badge of pride. It was at Nellis AFB that he met, fell in love with, and became engaged to fellow Airman Betty Jimerson, who requested to be his Special Escort back to Vermont. A Memorial Service was held at the base chapel on Aug. 16, 2012 and where all the Base flags were lowered to half mast in his honor. Patrick is survived by: his parents, his fiancAC. Betty Jimerson of Las Vegas, NV, his brother Michael R. Tomlinson, wife Sara and nephews Caleb and Aaron of St. Paul, MN; his brother Geoffrey A. Tomlinson of Northfield, NH; his brother Jay G. Tomlinson, wife Elizabeth, nephew Jayson and niece Anna; and his sister Kara A. Tomlinson of Bradford, VT. He is also survived by his many aunts, uncles and cousins from across the United States. He was predeceased by: his grandparents Bryon W. & Katherine (Baum) Tomlinson of Bradford, VT and Calvin E. & Gwendolyn (Harvey) McCormick of Lyndonville, VT; his Aunt Bonnie & Uncle Robert Tomlinson of Bradford, VT, and his Uncles Barry McCormick of Lyndonville, VT and Dennis McCormick of Reston, VA. Donations in Patrick's name may be made to Bradford Congregational Church, POB 387, Bradford, VT 05033; or to Green Mountain Council-BSA, POB 557, Waterbury, VT 05676-0557. Calling Hours will be at 227 South Pleasant Street, Bradford on Saturday, Aug. 25, 2012 from 5:00-8:00 pm. The funeral will be held at the Bradford Congregational Church at 3:30 pm on Sunday, Aug. 26, 2012, with the Rev. Karen Lipinczyk and Rev. Harvey Bartlett officiating. All are invited to attend the full military committal service, 21 gun salute and flag presentation at Sawyer Cemetery immediately following the funeral. A light supper and remembrance display will follow at the Bradford Congregational Church. Hales Funeral Home of Bradford, VT is in charge of arrangements. To view an online guestbook go to www.halefuneralhomes.com. To plant Memorial Trees in memory of Patrick William Tomlinson, please click here to visit our Sympathy Store.

The family of Patrick William Tomlinson created this Life Tributes page to make it easy to share your memories.

Send flowers to the Tomlinson family.