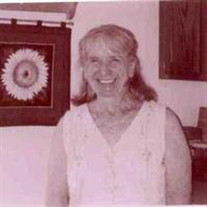 Pauline "Paula" Kent, age 78, of Newbury Village, Vermont departed this world for heaven on Valentine's Day, February 14th 2015 at her home, surrounded by her family, with her faithful dog, Gizmo, lovingly at her side. She was born August 18th 1936 in Birmingham, England. She was the only child of Leonard and Minnie Ellis. She was a graduate of The Convent of the Holy Child and Queen Elizabeth School of Nursing in Edgbaston, England. While reading in Hyde Park, London, she met an American airman, Donald Nelson of New Jersey, and they soon fell deeply in love and married in 1958. Together they had four children, Leonard, David, Catherine, and Theresa. Paula and Don shared a passion for peace and social justice and were not afraid to stand for their beliefs. Among their many activities were marching for civil rights during the 60's, a lasting peace for Vietnam and an end to the war, and they marched in support of the troops who had been deployed to Vietnam. Tragically in 1974, Donald was killed in an accident, leaving Paula, who had yet to learn to drive, alone to raise four young children. To fulfill the family dream, Paula moved the family to Cape Cod in the summer of 1975. In 1977, she met and married Charles Tolley and together they had a daughter, Elizabeth and the family lived on the beachfront of Corporation Beach in Dennis, MA. In 1992, Paula married her best friend and love, Tom Kent. They lived in North Eastham and Wellfleet, MA before moving to Newbury Village, Vermont in 1997 where they spent many happy years together. Paula was a strong woman of faith, who loved her Catholicism, but was a bright shining light in various churches over the years most recently, St Luke's in Woodsville, NH where she treasured her friendships and the counsel of Father "Bill" Watts. Paula, aside from her nursing career and raising five children, was a poet, journalist, certified home health caregiver, a talented pianist with a beautiful voice who loved music and the arts. While in Vermont, she worked for seven years as librarian at the Haverhill Library Association until her retirement in 2008. Best of all she was an amazing mother and grandmother and friend. She enjoyed reading, gardening, cooking, beachcombing, her dog Gizmo and, of course, a "good cuppa" of tea. She loved the community spirit of Newbury, Vermont and her many friends throughout the area. She will be missed by all the lives she touched, but especially those that loved her dearly. Survivors include her son and daughter-in-law Len and Stephanie Nelson of Falmouth, MA; son and devoted caregiver and companion Dave Nelson of Newbury, VT; daughters and sons-in-laws Cathy and Ken York of Douglasville, GA; Theresa and Mark Andrews of Bradford, VT; Liz and Jerry Craig of Newbury, VT and step-son and wife, Chris and Donna Kent of Auburn, NH and grandchildren Sarah, Rebekah and Jeremiah Nelson; Scott and Nic York; Hayley, Chase, and Carter Andrews; Tyler and Isaac Craig; Heather and Kevin Kent; and great grandson, Josiah Nelson and beloved cousin Marilyn "Sue" Langley, husband Pete and son Lee of England. Services will be held on Monday, February 23, 2015 at 2:00pm at the Congregational Church in Newbury Village with Father Bill Watts. There are no calling hours. A casual reception will be held in the church vestry following the service. In Lieu of flowers, anyone desiring to do so are encouraged to consider The Newbury, VT Fast Squad and Visiting Nurses/Hospice of NH and VT. The Hale Funeral Homes and Cremation Care of Bradford, VT is in charge of arrangements. Online condolences can be made at halefuneralhomes.com. To plant Memorial Trees in memory of Pauline Paula Kent, please click here to visit our Sympathy Store.

Pauline "Paula" Kent, age 78, of Newbury Village, Vermont departed this world for heaven on Valentine's Day, February 14th 2015 at her home, surrounded by her family, with her faithful dog, Gizmo, lovingly at her side. She was born August 18th... View Obituary & Service Information

The family of Pauline Paula Kent created this Life Tributes page to make it easy to share your memories.

Send flowers to the Kent family.