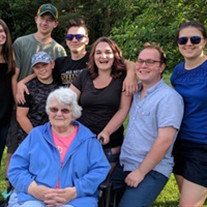 Bradford, VTPhyllis Hastings Russ, 88, passed away on Tuesday, November 28th surrounded by her children and grandchildren.Phyllis lived her entire life in Bradford, Vermont and was very active in her community and her church, Grace United Methodist. She was born on March 18th, 1929 and adopted by Minnie (Quimby) and Lambert Hastings. She had several half-siblings and a brother Carroll.Phyllis graduated from Bradford Academy in the class of 1947 and was a dedicated member of the B. A. Alumni Association. She had many jobs in Bradford including assistant town clerk and lister and was an Avon representative for 49 years.Phyllis married Leonard Jackson Russ on June 25th, 1955. They had four children together and built their first home on Still Hill in Bradford next door to the house where Phyllis grew up!Phyllis' number one priority was to support her children and grandchildren in everything they did. From theater, sporting events and school activities to scout leader, room mother, and avid fan. She loved to spend time at her family camp in Derby, Vermont, taking vacations, playing games, and sitting by the fire. She also loved lighthouses, jigsaw puzzles, word searches, Dancing With the Stars and was always up for any adventure with her friends and family. Phyllis was predeceased by her parents, her husband, her brother, and an infant son, Leonard Junior. She is survived by her three children, daughters Patsy Belknap and Rebecca and son-in-law Stephen Schramm, son Larry Russ and daughter-in-law Tara. She is also survived by the grandchildren she loved so much: Nicole and Jeremy Belknap, Eliza, Eli, and Isaac Russ, and Abigail and Jackson Schramm and many other extended family members. Services will be held on Sunday, December 3rd at 1:oo pm at the Grace United Methodist Church in Bradford. In lieu of flowers, donations may be made in Phyllis' name to the Grace United Methodist Church, P.O. Box 726, Bradford, VT 05033.Arrangements are entrusted to Hale Funeral Home & Cremation Care, 187 Upper Plain, Bradford, VT.Online guestbook at www.halefuneralhomes.com. To plant Memorial Trees in memory of Phyllis Hastings Russ, please click here to visit our Sympathy Store.

Bradford, VTPhyllis Hastings Russ, 88, passed away on Tuesday, November 28th surrounded by her children and grandchildren.Phyllis lived her entire life in Bradford, Vermont and was very active in her community and her church, Grace United Methodist.... View Obituary & Service Information

The family of Phyllis Hastings Russ created this Life Tributes page to make it easy to share your memories.

Send flowers to the Russ family.