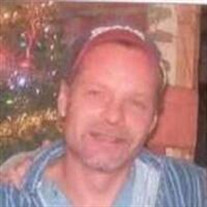 Groton, VT- Ralph W. Hill, 48, of Groton, VT died unexpected January 12, 2012 in South Strafford, VT. He was born on January 27, 1963 the son of Howard and Joan (Roberts) Hill. He was a graduate of Blue Mountain Union High School in Wells River, VT. After he graduated he then enlisted in the United States Navy in June of 1981 and was honorably discharged in July of 1985. He was married on July 1, 1989 to Gail Hill and was later divorced. He had been employed for Richard Hastings Builders, Northeastern Log Home Erectors and was working for Randy Keating Builders at the time of his death. He enjoyed hunting, golfing, was an avid New England Patriots fan, darts, pool, classic rock, Boston Red Sox's, Celtics and playing cards. He is survived by one daughter Sarah Jean Hill and her companion, Jason Fuller of Waterbury Center, VT.; one son, Ralph (Drew) Andrew Hill of West Topsham, VT.; his father, Howard Hill of Groton, VT.; three brothers, Jim Hill and his fiancAC. Winifred Welch Patten of Pike, NH., Nathan Hill and David Hill of Groton, VT.; two sisters, Judy Briggs and her husband Norman of Concord, NH and Laura Brown and her husband Mel of Groton, VT. He was predeceased by his mother Joan Hill. A celebration of Ralph's life will be held on Sunday, January, 22, 2012 at 3 pm at Randy Welch's resident on Fairground Road in Bradford, VT. There are no calling hours. Burial will be held at a later date. In lieu of flowers donations in his memory may be made to the American Heart Association, National Center, 7272 Greenville Ave, Dallas, TX 75231. The Hale Funeral Home of Bradford, VT is in charge of arrangements. To view an online guestbook go to www.halefuneralhomes.com To plant Memorial Trees in memory of Ralph W. Hill, please click here to visit our Sympathy Store.

The family of Ralph W. Hill created this Life Tributes page to make it easy to share your memories.

Send flowers to the Hill family.