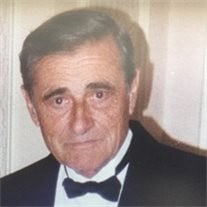 Richard T. Marquise, 92, of Ryegate, Vermont passed away on May 2, 2016. He was born June 11, 1923 to Anthony and Rose Marquise in New York City. After graduating from George Washington High School at age 16, he received a Bachelor's Degree from Fordham University in New York at age 19. He enlisted in the US Army in February 1943. He saw service in Alaska and later served as an interpreter at an Italian prisoner of war camp in Ogden, Utah, where he would meet Betty Murdoch, who would become the love of his life.After the war, he enrolled at Duke University in North Carolina, and it was there in 1946 he married Betty who would later give him four sons and a daughter. After graduating with a law degree in 1948, he returned to New York. In June 1949, with two young sons, he joined the Federal Bureau of Investigation (FBI) as a Special Agent. His first assignment took him to Indianapolis, followed by an assignment in North Platte, Nebraska, where his third son was born. While there, he took a vacation in Vermont where he and Betty would purchase property in Ryegate. He was later transferred to Wausau, Wisconsin. In late 1955 he transferred to FBI Headquarters in Washington, DC, where his last two children were born. The last 15 years of his FBI career were spent at the Washington Field Office where he worked on high profile cases and met and interviewed several US Presidents and numerous government leaders.During his career he received numerous commendations and awards personally from J. Edgar Hoover for excellence in service and his handling of cases of national profile.In December 1974 he retired to Vermont. Although it seemed he would be happy to live out his life in his beautiful home the family all referred to as the "farm," his career was not yet over, and he would find a calling to which it seemed he was destined.In 1975 he began a second career as a professor in the Administration of Justice (AJ) Program at Salve Regina University in Newport, Rhode Island, and was later appointed Chairman of this program. Numerous police officers from New England enrolled in this program, and, under his leadership, a Master's Program in AJ was established at Salve. He spent over 20 years teaching and mentoring law enforcement officers, many of whom would become heads of their agencies. He was very proud of the program and always believed a well-educated law enforcement officer would be a more effective officer. Education was always important to him, and he provided the example that ensured each of his children would go on to finish college. He received the Rhode Island Justice Assistance Award for 1987 with citations from the Lt. Governor and the Rhode Island Senate.He and Betty began to travel to Europe in 1992 and made many trips, alone and with family.His children and some of the grandchildren have memories of time spent with Richard and Betty in places like England, Scotland, Spain, Italy, France, Austria, Germany and Hungary. He met and connected with many of his father's side of the family while in Sicily.He was a gentleman farmer and an accomplished furniture maker, whose pieces adorn the homes of his children.He had an extraordinary sense of humor and captivated everyone with his story telling. His mind was sharp to the end of his life, and he enjoyed political debates with his children and grandchildren.He is survived by his wife of almost 70 years, Betty of Ryegate, their children Richard (wife Patricia) of Springfield, Virginia; Greg (wife Sue) of St. Petersburg, Florida; Dennis (wife Shelly) of Thetford, Vermont; Sheila Barbas (husband Charles) of North Reading, Massachusetts; Michael (wife Celeste), of Bellows Falls, Vermont. He is survived by 12 grandchildren, Ian, Christian, Dustin, Jonathan, Derek, Damien, Kalleen, Christopher, Cassandra, Eric, Anthony, and Theresa; and 12 great grandchildren, Adrian, Tristan, Matthew, Gabriel, Madelyn, Hailey, Liliana, Makinley, Colton, Greyson, Ryder and Leif. He is also survived by his sister Mary Cataldo, of Pittsburgh, Pennsylvania.He was loved by all of them who looked up to him as a great man and one of the last of the "Greatest Generation".In lieu of flowers, the family requests that contributions be made to Caledonia Home Health Care & Hospice, 161 Sherman Dr, St. Johnsbury, VT 05819. To plant Memorial Trees in memory of Richard T Marquise, please click here to visit our Sympathy Store.

Richard T. Marquise, 92, of Ryegate, Vermont passed away on May 2, 2016. He was born June 11, 1923 to Anthony and Rose Marquise in New York City. After graduating from George Washington High School at age 16, he received a Bachelor's Degree... View Obituary & Service Information

The family of Richard T Marquise created this Life Tributes page to make it easy to share your memories.

Richard T. Marquise, 92, of Ryegate, Vermont passed away on May...

Send flowers to the Marquise family.