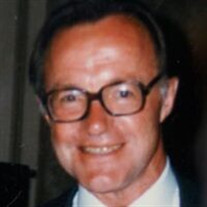 Richard (Dick) Carl Simon, born in Brooklyn on August 21, 1925, raised in Delmar, NY, son of Maximillian R. Simon and Clara Deck, died peacefully on May 29, 2016 in White River Junction, VT, after a long illness. He attendedattended MIT until 1943 when he was drafted into the US Army, 397th Infantry, 100th Division. He fought in the Vosges Mountains in France, serving as first scout on the front lines, earned a Bronze Star and Purple Heart, and was imprisoned in one of Germany's toughest POW camps. In 1949 he earned a BA from Amherst College, where he was a member of Delta Upsilon and a varsity football star athlete. In 1951 he earned an MBA from Harvard University. He worked as an executive in international marketing for GE, AMF, and Litton Industries. In 1948 he married May Blatz and settled in Mountain Lakes, NJ; and in 1984 he married Janet Murphy and moved to Morristown, NJ. For 29 years Simon lived in Morristown, NJ, where he led many historical and preservation organizations, serving as: Trustee and President of the Washington Association of New Jersey; Trustee of the Canal Society of New Jersey; Member of Advocates of New Jersey History; Board Member of the Morris County Heritage Commission; Board Member of the Friends of Florham; New Jersey Representative of the Washington/Rochambeau Revolutionary Route; Trustee and President of Macculloch Hall Museum; Board Member of Crossroads of the American Revolution Association; and Trustee of the Morristown Green. He authored The Green: A History of the Morristown Green and Revolutionary War Sites in Morris County. Simon was a civic leader, veteran, artist, curator, historian, lecturer, author, outdoorsman, bicyclist, collector, avid reader, business executive, Francophile, and world traveler. He also played the piano and sang. A skilled artist, Simon sketched and painted watercolors of architecture and landscapes. He was President of the Shakespeare Club of Morristown and acted in a Morristown Community Theatre production. He gave historical walking tours for the Morris County Tourism Bureau. For his 50th high school reunion, he rode his bike from Morristown to Delmar. He enjoyed restoring furniture and frames. He was a Renaissance man and part of the Greatest Generation. His indomitable spirit and strong heart have inspired many, and he will be greatly missed by his family and many friends. Simon was predeceased by his son, Richard C. Simon Jr., and is survived by his first wife, May Blatz Fagan of Hanover, NH, children Elizabeth Simon of Germantown, MD, Susanne Simon of Lyme, NH, Priscilla Connolly of Newbury, VT, Robert E. Simon II of Branchburg, NJ; second wife, Janet Murphy Robertson of E. Dennis, MA, children Jeffrey M. Simon, and Katherine Deconinck of Paris, France. Graveside services will be at Taft Cemetery, Dummerston, VT at 2:00 PM on Thursday, June16, 2016. Memorial donations can be sent to: Disabled American Veterans Charitable Service Trust. To plant Memorial Trees in memory of Richard Carl Simon, please click here to visit our Sympathy Store.

The family of Richard Carl Simon created this Life Tributes page to make it easy to share your memories.

Send flowers to the Simon family.