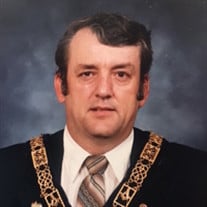 Corinth, VTRobert J. "Butch" Donnelly of Rollie Day Road passed away Tuesday, March 20, 2018 at the Jack Byrne Palliative Care and Hospice at Dartmouth-Hitchcock Medical Center. He was 73.Born on February 27, 1945 in Hanover, NH, he was the son of Robert J. and Nellie (Cummings) Donnelly, Sr.Butch attended schools in Lyme, NH and was a 1963 graduate of Thetford Academy.He served in the US Army from 1965-1969.On August 14, 1971, he married Verla L. "Jigger" Comstock.Butch retired from the US Postal Service from 1978 to 2002, serving the last 10 years as Postmaster of North Haverhill.He was a member and Past Master of Bradford Charity Masonic Lodge #43, a member and Past Worthy Patron of the Order of the Eastern Star of Corinth, VT, and past Grand Secretary, Senior Deacon, and District Deputy of the Grand Lodge of Vermont. He also was Past President and Past General Chairman of the Shrine Maple Sugar Bowl Game in Lebanon, NH; Scottish Rite and York Rite of Masonry; and National Sojourners Green Mountain Chapter 527.His past times included beekeeping for many years, loved to watch birds at the feeders in the winter, his dog Rowdee and cat Grover; loved hunting and fishing as well as watching sports on television.Besides his parents, he is pre-deceased by a daughter Nicole Ray Hall in 2017.He leaves his loving wife of 46 years, Verla "Jigger" Donnelly of Corinth; a son Todd Donnelly and wife Kristin of Waterboro, Maine; grandson Liam Donnelly of Waterboro, Maine, granddaughter Olivia Hall of Waterford, VT; son-in-law Aaron Hall of Waterford, VT; a brother William Donnelly of Orford, NH; two nephews and a niece.A masonic graveside service will be held at 10am Saturday June 2 at Orford Street Cemetery in Orford, NH. A reception will follow at the Bradford Masonic Hall.Arrangements are by Hale Funeral Homes and Cremation Care of Bradford & Thetford, VT. Online guestbook at www.halefuneralhomes.com. To plant Memorial Trees in memory of Robert J. "Butch" Donnelly, please click here to visit our Sympathy Store.

Corinth, VTRobert J. "Butch" Donnelly of Rollie Day Road passed away Tuesday, March 20, 2018 at the Jack Byrne Palliative Care and Hospice at Dartmouth-Hitchcock Medical Center. He was 73.Born on February 27, 1945 in Hanover, NH, he was the... View Obituary & Service Information

The family of Robert J. "Butch" Donnelly created this Life Tributes page to make it easy to share your memories.