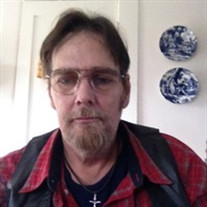 Bradford, VT- Robert Kenneth Holly (Bob) 60, of Goshen Road died Sunday, October 23, 2016 at his home in Bradford, following years of chronic pain. He was born July 19, 1956 in Springfield, MA the son of Kenneth and Joanne (Howard) Holly.Bob was a 1974 graduate of Westfield High School and later received a degree in Automotive technology from United Technical College in Springfield, MA.Bob worked for General Motors Corporation in Westfield, MA as a mechanical technician on new automobiles. He later drove tow trucks for area businesses. In 1980 Bob moved to Piermont, NH where he was employed by Bradford Tire and Auto, and Bob's Automotive. Prior to becoming a victim of a tragic motor vehicle accident in 1984. Bob loved helping farmers with their tractors and even attempted logging.Bob moved to Bradford, following the accident. He loved hunting and hanging out with his friends. Bob's true love was restoring old vintage trucks and ride on tractors. Up until the time of his death bob was in his element with his small engine repair shop, Taxbox Auto. He contributed to the fun at the lawn mower races and looked forward to John Roger's annual gathering for a pig roast. His chili contributed to the gang's first place win. He always provided everyone with the beat seat in the house for the 4th of July fireworks and spectacular bonfire.Bob is survived by his mother, Joanne Holly and companion Richard Remillard of South Hadley, MA; one sister, Elizabeth Thompson and husband Wayne of Piermont, NH. He leaves behind a beloved aunt and uncle, Sally Sparrow of Agawam, MA and Jarius Burt of Easthampton, MA; in addition to five cousins and their families. Bob had many good friends, whom he loved dearly, and whom he treasured as family. Their unconditional love and support helped him navigate a very rough journey.A celebration of his life will be held at his home on Apple Ridge Lane, off of Goshen Road, November 5, 2016 at 1 pm.Memorial contributions may be made to Oscar's Memorial Dog Park, Newbury Veterinary Clinic, 3890 Route 5, Newbury, VT 05051 c/o Dr. Amy Cook.The Hale Funeral Homes and Cremation Care of Bradford, VT are in charge of arrangements.To view an online guestbook go to www.halefuneralhomes.com. To plant Memorial Trees in memory of Robert Kenneth Holly, please click here to visit our Sympathy Store.

The family of Robert Kenneth Holly created this Life Tributes page to make it easy to share your memories.

Send flowers to the Holly family.