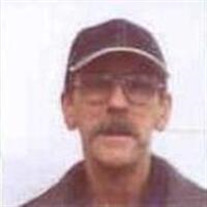 Hartford, VT-Robert George "Bob" Small of Hartford Village, VT, died on December 18, 2011 from declining health caused by his long struggle with dementia. Born on September 6, 1952 in Lyme, New Hampshire, he was the tenth child born of Daisy and Harry Small. He attended school in Lyme then worked at Channel Mills in Bradford, VT. Afterwards he went to work at Dartmouth College janitorial maintenance, where he worked for 30 years before leaving in February 2011 because of his illness. He lived a quiet modest life. He enjoyed listening to music, walking along the river, driving to see familiar places from his past, and although few knew it, charcoal sketching. He was a very private person and had respect for the privacy of others. He loved his family very much and enjoyed looking at photos of them. Late in his life, Bob grew to have a great love and trust in Jesus Christ. He was predeceased by his parents, his brother Kenny, and his infant siblings Mary Jane and Harry Albert Jr. He is survived by his sisters Minnie Hahn of Prescott, AZ, Rita Thompson and husband Art of Inglis, FL, Evelyn Schultz and husband Charlie of Hartford, VT, and his brothers Richard Small and wife Priscilla of Grantham/Newport NH area and Cape Coral, FL and Larry Small and wife Donna of Charleston, NH and Naples, FL. He was also survived by his sister Nancy Dyke and her husband Tim of Orford, NH who cared for him in his illness. Tim was a very loving and caring brother to Bob throughout his ordeal. Two other special people in Bob's life were Cindy and Heather, whom he loved as his own daughters. He had many nieces and nephews, including Adam Dyke and family of Newbury, NH and Craig Dyke and family of Dunlap, IL, with whom he was particularly close, as well as a numerous great nieces and nephews. Graveside funeral services will be held in the spring in the family lot in the Highland Cemetery in Lyme, NH. There are no calling hours. The Hale Funeral Home of Bradford, VT is in charge of arrangements. To view an online gue4stbook go to www.halefuneralhomes.com To plant Memorial Trees in memory of Robert George Small, please click here to visit our Sympathy Store.

The family of Robert George Small created this Life Tributes page to make it easy to share your memories.

Send flowers to the Small family.