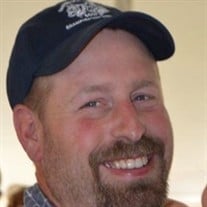 Bradford, VT- Robert S. Taylor, 45, of Bradford, VT passed away unexpectedly on Tuesday August 15, 2017. Bob was born in Woodsville, NH on November 29, 1971 the son of Marvin and Carole (Pollender) Taylor. He graduated from Oxbow High School in 1990.Bobby worked for the Co-Op in Hanover, NH as a mechanic for seventeen years before switching his career this summer to work for Hood's Plumbing and Heating in North Haverhill, NH.He enjoyed spending time hunting, pulling his draft horses, riding motorcycles and going for rides with his dog Gus. Bobby will be remembered for his sense of humor, big heart and contagious smile.Bobby was predeceased by his father Marvin Taylor Sr in August of 2013. He is survived by his son Christopher Taylor and Mariah Gray, his mother, Carole Taylor, three sisters, Yvette Kilduff, Tammy Coffin and Christina Welch and one brother, Bill Taylor, several nieces and Nephews, Adam Thurston and his children Talen and Ty, Elizabeth Thurston, Ashley Cox and her children Kaidyn and Liam, Traci Ste. Marie and her children Carson, Mason and Jaden, Tanner and Alexandria Coffin and Skylar and Ryder Welch.A celebration of his life will be held on Thursday, August 24, 2017 at 1 pm in Hale Funeral Home, 187 Upper Plain, Bradford, VT. There are no calling hours. Burial will be private in the family lot in Sawyer Cemetery in Bradford, VT.The Hale Funeral Homes and Cremation care of Bradford, VT are in charge of arrangements.To view an online guest book go to www.halefuneralhomes.com. To plant Memorial Trees in memory of Robert Scott Taylor, please click here to visit our Sympathy Store.

The family of Robert Scott Taylor created this Life Tributes page to make it easy to share your memories.

Send flowers to the Taylor family.