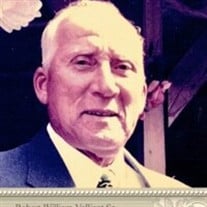 Robert "Bob" William Valliant, Sr., 90, of Bradford, passed away October 9, 2018 at Cottage Hospital in Woodsville, NH after a brief bout with pneumonia. He was surrounded by his loved ones. His funeral service was held on Sunday, October 14. We apologize for the timing and realize this made it difficult for some people to attend, however, it allowed his immediate family to be present. Bob was born May 16, 1928, the son of John William Valliant and Pearl May Dunbar Valliant, and grew up in Corinth, VT. He joined the military when he as 16, served for 3 years, then returned to Bradford. He later decided to re-enlist in the Navy and served for 22 years. Most of his military career was spent in Coronado, California, with many trips abroad. During this time he married his wife Betty Louise Connors Johns on August 8, 1959 (who predeceased him). She has five children Robert took on as his own. After his retirement from the Navy, Bob returned to Bradford with his wife and son Robert Jr. Bob went to work for Pratt's Propane in Bradford and retired after 15 years. Bob was known as everyone's favorite delivery driver. He was an avid golfer and spent many years breeding and raising beagles. His favorite dogs were Rex and Flame. One of his greatest joys was watching his son play baseball, and torturing his children and grandchildren with Western show reruns. Bob was honored to receive the Bradford Cane for the Oldest Male Citizen in 2017. He is survived by his son Robert William Valliant Jr.; his grandchildren Alexandra, Christana, and Robert Valliant III of New Hampshire; his daughter Jacque Mays; sister Annie and Mable; brother Joe; and 18 nieces and nephews. Bob is also survived by 15 grandchildren, 22 great-grandchildren, and one great-great grandchild. In addition to his wife Betty, Bob was predeceased by his parents, his sister Hazel Valliant Chase, stepsons Edward Gordon John Jr.; Frederick Lasahan Johns, James Daniel Johns Sr., and stepdaughter Betty Dianne Johns. Bob is dearly missed by his family and friends, but we believe he will be happy to be reunited with Betty, the love of his life. To plant Memorial Trees in memory of Robert William Valliant, please click here to visit our Sympathy Store.

Robert "Bob" William Valliant, Sr., 90, of Bradford, passed away October 9, 2018 at Cottage Hospital in Woodsville, NH after a brief bout with pneumonia. He was surrounded by his loved ones. His funeral service was held on Sunday, October 14.... View Obituary & Service Information

The family of Robert William Valliant created this Life Tributes page to make it easy to share your memories.

Send flowers to the Valliant family.