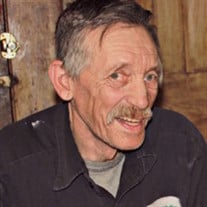 Waits RiverRobert Nelson Wheeler of Honey Corners Road passed away Saturday, December 9, 2017 at his home following a period of declining health.He was born on April 7th, 1947 to Spencer and Helen Wheeler of Cabot, Vermont. He grew up in Cabot with his sister Linda, brothers Roger and Larry, and adopted brother Charlie. Robert spent many summers working on neighborhood farms where he enjoyed working the fields and caring for the animals. He was a worker even at a young age, willing to help anyone who was in need. He graduated from The St. Johnsbury Trade School.In April of 1973, he married Holly Eggleston. They settled in Waits River Vermont where they raised their family. He was employed as a laborer for Wyman's in Montpelier, VT and retired as a Wastewater Manager from Unifirst in Lebanon, NH.Animals were known for adopting him. He always had critters at the "Wheeler Farm" inside and out. He was also known for his elaborate goat house and handmade birdhouses.Robert enjoyed working on cars and anything else with a motor, hunting, sugaring, working around the house and spending time with his family and friends. He will be remembered for his Yankee ingenuity, vibrant storytelling, colorful language, green thumb, and the love he had for his grandchildren.He is survived by his wife of 44 years, Holly Wheeler of Waits River, VT;two daughters Kristin Emerson and husband Barry of Topsham, VT and Amy Wheeler and partner Cristina Costa of Marlboro, MA; three grandchildren Jacey Emerson and companion Greg Smith of Bradford, Andrew Emerson and Ethan Emerson both of Topsham, VT; a great-great granddaughter Ava Smith of Bradford, VT; two brothers Roger Wheeler and wife Denise of Calais, VT and adopted brother Charlie Pilbin of Cabot, VT; a sister Linda Ducharme and husband Felix of White River Junction, VT; sister -in-law Alice Payne of Newbury, VT; brother -in- law Gary Eggleston and wife Linda of East Barre, VT; sister -in- law Carole Partington and husband David of Danville, VT; Sister -in- law Pam Partington and husband Robert of W.Topsham, VT; brother -in- law Ernest Eggleston and wife Cheryl of W. Topsham VT; Sister -in- law Robin Davis of Haverhill, NH and several nieces and nephews.Robert is predeceased by his parents Spencer and Helen Wheeler and youngest brother Larry; Brother -in- laws Kenneth Payne and Steven Davis.There will be a casual gathering with coffee and conversation on Saturday January 20th at TheBradford Senior Center from 6-8pm.Memorial donations may be made to the Topsham Corinth Little League checks written to TCLLattn: Kristin Emerson 52 Stryker Rd, Topsham VT 05076Arrangements are by Hale Funeral Homes and Cremation Care of Bradford & Thetford, VT.Online guestbook at www.halefuneralhomes.com. To plant Memorial Trees in memory of Robert Wheeler, please click here to visit our Sympathy Store.

Waits RiverRobert Nelson Wheeler of Honey Corners Road passed away Saturday, December 9, 2017 at his home following a period of declining health.He was born on April 7th, 1947 to Spencer and Helen Wheeler of Cabot, Vermont. He grew up in Cabot... View Obituary & Service Information

The family of Robert Wheeler created this Life Tributes page to make it easy to share your memories.

Send flowers to the Wheeler family.