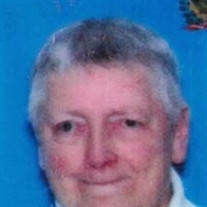 East Thetford, VT- Rose Godfrey Reunanen, 70, of East Thetford, VT died on Monday, January 2, 2017 at Dartmouth Hitchcock Medical Center in Lebanon, NH after a long battle with Cancer.She was born in Randolph, VT the daughter of Bernard and Jean(Rhodes) Godfrey. She attended schools in Thetford, VT and was a 1964 graduate of Thetford Academy, she then attended Concord Commercial College. She was employed for Dartmouth Hitchcock Medical Center and Dartmouth Medical School as a secretary for many years. She was married to Don Reunanen on August7, 1974 who survives.She is survived by her husband Don of East Thetford, VT.; one son, Jay of Stratton, VT.; her mother Jean Godfrey of East Thetford, VT and one sister, June Davidson of East Thetford, VT.; two Aunts, Barbara Smith of Hanover, NH and Ruth Jenks of Lyme, NH.; two uncles, Norman Rhodes and Richard Godfrey of Lebanon, NH, several nieces and nephews and cousins.Graveside funeral services will be held on May 13, 2017 at 11 am in the family lot in the Evergreen Rest Cemetery in Thetford Center, VT. There are no calling hours.Donations in her memory may be made to the Thetford Volunteer Fire Department, Route 113, Thetford, VT 05074. Or to the Visiting Nurse and Hospice of VT and NH, 88 Prospect Street, WRJ, VT 05001.The Hale Funeral Homes and Cremation Care of Thetford Center, VT are in charge of arrangements.To view an online guest book go to www.halefuneralhomes.com. To plant Memorial Trees in memory of Rose Godfrey Reunanen, please click here to visit our Sympathy Store.

The family of Rose Godfrey Reunanen created this Life Tributes page to make it easy to share your memories.

Send flowers to the Reunanen family.