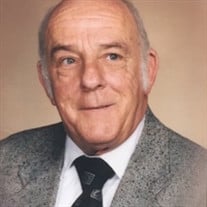 Fairlee, VT-Russell Benjamin Smith 86 died peacefully at Dartmouth Hitchcock Medical Center early Monday morning February 18, 2019 with his close friends Georgette Wolf-Ludwig and Mary Davenport by his side.He was born in Fairlee, VT on April 8, 1932 the son of Hazen and Betty (King) Smith. He received his schooling in Orford and Lebanon, NH, graduating from Orford High School in June 1950. He served in the United States Air Force from 1952-1956, with 3 years in England.Russ was a Scoutmaster for Troop #36 of Orford/Fairlee for 17 years as a member of the NH Daniel Webster Council; seven scouts made it to the rank of Eagle Scout. He was the Scouting Coordinator for the Fairlee Cub Scout Pack 775 and was presented with the Silver Beaver Award on April 15, 1989, at the Boy Scouts of America Green Mountain Council's Annual Statewide Recognition Banquet in Burlington, VT. This is the highest award given by a Scout Council to its adult volunteers for their exceptional service to youths in Boy Scouts. He also worked with the Fairlee Girls Scouts on camping trips and hikes. He was a Little League Coach for 16 years, a volunteer basketball referee for 10 years, and a volunteer Babe Ruth League Umpire for more than 10 years.He worked for the Postal Service for 23 years and was Postmaster at the Fairlee Post Office for 13 years.He served on the Fairlee Civil Defense Committee, Recreation Council and the School Space Needs Committee. He was the Fairlee Town Moderator for 19 years, Fairlee School Moderator for 19 years, a Grand Juror and Fence Viewer for the Town of Fairlee. He was a 15-year member and past officer of the Fairlee Fast Squad, serving as an EMT and Squad Treasurer and a 42-year member and past officer of the Fairlee Volunteer Fire Department. He was a member of the Fairlee Community Church for 38 years, was the Church Moderator, Deacon and a 20-year volunteer for the annual church suppers. He was a member of the United Church of Christ of Bradford, VT, was the Assistant Moderator and then Moderator and Head Usher. He was a member of the VFW past Post 8504 Commander, District Chaplain and National Aid De Camp and a member of the Elks. He served as coordinator for the 4th of July parades for many years.Since his retirement in 1992 and until 2018 Russ was a Library Volunteer and Substitute Teacher for the Fairlee Elementary School then the Samuel Morey Elementary School. Working with children was his ultimate joy.He loved history and was President of the Fairlee Historical Society. He loved working in the Historical Society Office going through newspapers and cutting out articles. He donated many items including pictures and personal artifacts from his past achievements. He was a huge supporter of Fairlee Town Hall accessibility project and spoke at the Grand Re-Opening Celebration. He came to the Town Hall everyday and had a special chair in the Town Clerk's Office.Russ was predeceased by his wife, Barbara (Lange) Smith, whom he married on October 16, 1970 his sisters Lorraine Howland of Lebanon, NH and Virginia Crow of Piermont, NH his brothers (predeceased) Glenn Smith of Lebanon, NH; Hazen Smith, Jr. of Franklin, NH; Gene Smith of North Chichester, NH; his stepson Kevin Bell, his wife Jan and grandsons Sean and Bradley. He was predeceased by a stepdaughter Sharon Bell. He also leaves behind a large community who loved him very much.A Memorial Service will be held in his honor at the Fairlee Community Church with Pastor Richard Hodge officiating on Saturday, March 2, 2019 at 1:00 pm. There are no calling hours and a Committal Service will be held at the Fairlee Village Cemetery in the spring. In lieu of flowers Russ requested that contributions be made to the Fairlee Scholarship Fund PO Box 95 Fairlee, VT 05045.Arrangements are by Hale Funeral Home and Cremation Care, 187 Upper Plain, Bradford, VT 05033. Online guestbook at www.halefuneralhomes.com. To plant Memorial Trees in memory of Russell Benjamin Smith, please click here to visit our Sympathy Store.

The family of Russell Benjamin Smith created this Life Tributes page to make it easy to share your memories.