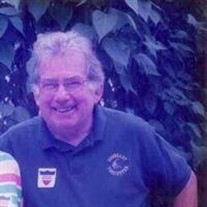 Piermont, NH-Samuel Arnold Shields 83 passed away July 19, 2014 in Grafton County Nursing Home North Haverhill New Hampshire. He was preceded in death by his wife of 59 years Marian Robbins Shields, in November 2011 and a granddaughter Deidre Shields in August 1988. He is survived by his two sons: Peter E. Shields (Mary) of Kansas City, Missouri and Paul E. Shields (Suzanne) of Towson, Maryland. He is also survived by six grandchildren: Brandon Mckean-Shields of Springfield Missouri, Edward Shields of Columbus, Ohio, Erin Sanders of Towson Maryland, Conor Mckean-Shields of Springfield Missouri , Bridget Shields of Kansas City Missouri, and Katherine Shields of Towson Maryland, and three great grand children: Elijah Mckean-Shields of Springfield MO, Ashley Sanders, and William Sanders both of Towson MD. Samuel Arnold better known by most as Arnold Shields was born August 23, 1930 to Samuel Shields and Janet Jevins Shields in Springfield, Massachusetts. He married Marian in Piermont in November 1952. He was a graduate of Plymouth state College with a Bachelor of Arts. He was a veteran who served from 1952-1958 in the US army and army reserves. He taught high school English in Suffield CT from 1959-1969. The family then moved to Kansas City MO where he worked a variety of government contract positions, and was the Head Start director for Kansas City till 1981. He and his wife moved back to the north country in 1981 where he taught High School English at Oxbow High school until his retirement. He was involved in Vermont Boys State for many years. He was active in the National Educational Association (teachers union) being local and Vermont state NEA president, and after retirement, their business director. An avid cyclist in his younger years he and his wife took several trips to the British Isles and Ireland and hosted cyclists at their home. He was a founding member and past president of the Unitarian Universalist Congregation of the Upper Valley. He also served on the Board and was past president of the NH & VT Unitarian Universalist Association. He served as the Piermont, NH Town Moderator from 1986-2007. He was also an unsuccessful candidate for office for the New Hampshire legislature and served as a state and national delegate to the Democrat Party in 1992. He worked tirelessly for Democrats in the state. His life will be remembered in a Memorial Service to be held at 2:00pm, Sunday, August 10, 2014 at the family plot at South Lawn Cemetery in Piermont. A reception will follow at the Piermont School. The family is requesting that instead of flowers, memorials in Arnold's name may be made to: Boy's State of Vermont, Alzheimer's Association or the Unitarian Universalist Congregation of the Upper Valley. The Hale Funeral Home and Cremation Care of Bradford, VT are in charge of arrangements. To view online guest books go to www.halefuneralhomes.com To plant Memorial Trees in memory of Samuel Arnold Shields, please click here to visit our Sympathy Store.

The family of Samuel Arnold Shields created this Life Tributes page to make it easy to share your memories.

Send flowers to the Shields family.