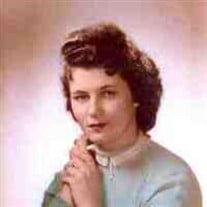 Bradford, VT - Sandra Jean (Cotey)Pike, 72, passed peacefully on the morning of Friday July 10, 2015 at her home surrounded by her loving family and her beloved Boston Terrier Cotey.She was born September 22, 1942 at the Barre City Hospital in Barre, VT to Patrick & Caroline (Francis) Cotey. Sandra grew up in the Corinth Corner, VT area and also spent time with family in both New Jersey and Connecticut. Sandra attended the Cookville Grammar School, Corinth, VT and graduated from the Bradford Academy Class of 1960. After graduation Sandra went to work at the Waterbury State Hospital in Waterbury, VT and then the Ford's Nursing Home in Haverhill, NH. In April 1959 Sandra met her soulmate and love of her life Richard "Dick" Pike. On February 23, 1963 they were married at the Our Lady of Perpetual Help Church in Bradford and made their home of 52 years in Bradford, VT. Sandra left the work force to be a stay at home mom after the birth of her sons Richard Jr, and Mark. Once they were school age she returned to the workforce working for Chrysler Corporation - Bradford Motors overseeing the State of Vermont's Fleet Plan and later as the Billing Accountant for the Channel Textile Corporation where she worked for 19 years before retiring in 1994 due to her health. In addition to working fulltime Sandra made many wedding, anniversary, and birthday cakes for family, friends, and local couples. She was also known for her many craft talents which she made and sold privately and at local craft fairs. Sandra enjoyed the outdoors and loved to go fishing, camping at Ricker Pond in Groton, VT, and working in her vegetable and flower gardens. She enjoyed doing things for others and never expected anything in return. However, her greatest joy was time with her family and many Boston Terriers over the years. When Sandra's health no longer allowed her to do the many thing she enjoyed and loved doing she never once complained and continued to do what she could independently.Sandra is survived by her husband Dick of 52 years and her two sons Richard Jr. and Mark J all of Bradford, VT and a brother-in-law Fredrick Spooner. She is predeceased her five siblings, Joseph Cotey, Paul Cotey and spouse Gladys, Edna Spooner, Leona Bushway and spouse Kenneth, and Geraldine DeCell and spouse Milford, and leaves behind many cousins, nieces and nephews.In honoring Sandra's request - there will be no calling hours or service -she wanted people to remember her in their own private and special ways. A gathering maybe held at a later date for family and friends. Those wishing to make donation in her memory may do so to: Upper Valley Ambulance, Attn. Eva Chapman, PO Box 37, Fairlee, VT 05045.The Hale Funeral Home and Cremation Care of Bradford, VT is in charge of arrangements.To view an online guestbook go to www.halefuneralhomes.com To plant Memorial Trees in memory of Sandra Jean Pike, please click here to visit our Sympathy Store.

Bradford, VT - Sandra Jean (Cotey)Pike, 72, passed peacefully on the morning of Friday July 10, 2015 at her home surrounded by her loving family and her beloved Boston Terrier Cotey.She was born September 22, 1942 at the Barre City Hospital... View Obituary & Service Information

The family of Sandra Jean Pike created this Life Tributes page to make it easy to share your memories.

Send flowers to the Pike family.