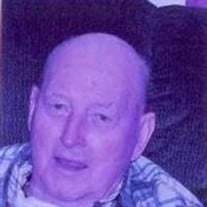 Lebanon, NH- Scott C. Moses Jr, 83, of Lebanon, NH died April 9, 2012 at Dartmouth Hitchcock Medical Center in Lebanon, NH. He was born on February 27, 1929 the son of Scott and Dorothy (Estes) Moses Sr. He attended schools in Thetford, VT. He was married to Marguerite Downes for forty-eight years; she predeceased him on April 13, 2002. He enlisted in the United States Army and was honorably discharged in 1952. He then went to work in the copper mines from 1952- 1958 and for the past thirty-four years had worked for Dartmouth College in the Building and Grounds Department retiring in 1992. Scott enjoyed hunting, fishing and just spending time in the outdoors. He is survived by one daughter, Brenda Masterson and her husband, Phillip of Wilder, VT.; two sons, Brett Moses of Charlestown, NH and Scott Moses III and his wife Charlene of Cornish, NH; two grandchildren, Scott IV and Elizabeth Rose Moses; two sisters, Mary Godfrey of Fairlee, VT and Darlene Phillips of Brandon, VT, several nieces and nephews. He was predeceased by one brother, Stanley Moses. Graveside funeral services will be held on Friday, April 13, 2012 at 1 pm in the family lot in the Post Mills Cemetery in Post Mills, VT. There are no calling hours. In lieu of flowers donations in his memory may be made to a charity of one's choice. The Hale Funeral Home of Bradford and Thetford Center, VT is in charge of arrangements. To view an online guestbook go to www.halefuneralhomes.com To plant Memorial Trees in memory of Scott C. Moses Jr, please click here to visit our Sympathy Store.

The family of Scott C. Moses Jr created this Life Tributes page to make it easy to share your memories.

Send flowers to the Moses family.