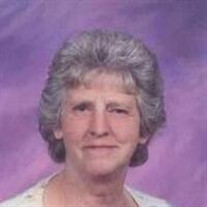 Topsham, VT- Shirley Bruliegh, 73, of Topsham, VT died suddenly Tuesday, March 13, 2012 at her home. She was born on October 3, 1938 in Bradford, VT the daughter of Ernest and Nina (Shumway) Covey. She attended schools in Bradford, VT Shirley had been employed for many years at the Bradford Mini Mart in Bradford, VT in the day to day operations of the store. She had many interest but her greatest joy was spending time with her family, her mission in life was helping others. She loved to sew with her sister Lilia. On Saturday nights you would find her at the races cheering on her grandsons, one of her other greatest joys was being with her grandchildren. She is survived by two daughters, Kathy Barnard and her husband John of Granville, NY., and Laurie Kirkpatrick and her husband Brian of East Corinth, VT., one son, Tony Bruleigh and his wife Brenda of East Corinth, VT.; six grandchildren, Kerry Nikfarza and her husband Omid, Josh Harrington and his wife Emily, Jessica Placey and her husband Thomas, Kane Pike and his wife Katelyn, Ryan Bruleigh, Jonathan Pike and his fiancAC. Ariel Pratt; 10 great-grandchildren, Madysen, Sawyer, Reese, Evan, Gillian, Alexis, Kenzie, Griffin, Rylee, and Brayden; four brothers, Richard, Donald, Ernest and Burton Covey; three sisters, Lila O'Donnell, Karel Hill and Audrey Wadkins, and many nieces and nephews. She was predeceased by two brothers, Lyle and Merle Covey and two sisters, Linda Chaffee and Sandra Williams. Funeral services will be held on Monday, March 19, 2012 at 1 pm in the West Topsham Church with Candace Ricker officiating. Visiting hours will be held Sunday evening from 6-8 pm at Hale Funeral Home, Upper Plain, Bradford, VT. Interment will be held in the spring in the family lot in the East Corinth New Cemetery. In lieu of flowers donations in her memory may be made to the Norris Cotton Cancer Center, One Medical Center Drive, Lebanon, NH 03756. The Hale Funeral Home of Bradford, VT is in charge of arrangements. To plant Memorial Trees in memory of Shirley Bruleigh, please click here to visit our Sympathy Store.

The family of Shirley Bruleigh created this Life Tributes page to make it easy to share your memories.

Send flowers to the Bruleigh family.