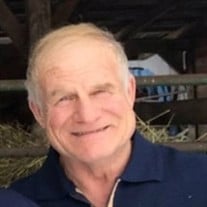 Steven Jackson Johnson was born on June 16th, 1947 and passed away on August 22nd, 2015. He was a renaissance man who did a little bit of everything and loved spending time with his family. He was the son of Ronald and Patricia Johnson and Norma Crowley.Steve graduated from Castleton State College with a degree in Education, and that was where he met his wife Jane. Together they built a life in Bradford and Newbury VT, where they owned Johnson Lumber Company for 35 years, and Sky Acres Ranch. Education was very important to Steve, and he made it a priority to put his six kids through college. He greatly valued knowledge, and whenever he wanted to learn a new skill he would just pick up a book and teach himself how to do it. Steve loved being around his family, working in the woods, and being on his farm. Steve was especially fond of growing strawberries. He also owned the US and Canadian National Grand Champion Hereford Bull in 2001 and showed many champions in the US and Canada over the past 20 years. He loved to play cards with his family and always had a big smile on his face. Steve was an active outdoorsman, a big Red Sox and Celtics fan, and enjoyed nothing more than going to see his kids or grandkids play sports.He is survived by his wife Jane, his six children: Stephanie Johnson and Mark Langlois; Kane Johnson and Diane Hood; Steele and Iris Johnson; Heidi and Mike Nostrant; Ashley Johnson; and Jade and Richard Swenson; as well as his eight grandchildren: Amber Johnson, Echo Leonard, Isabella Johnson, Grace Nostrant, Sage Johnson, McKenzie Nostrant, Mia Johnson, and Jackson Langlois. He is also survived by mothers Patricia Johnson and Norma Crowley; his brothers: Mark and Patty Johnson; Frank and Marilyn Johnson; Jack and Annette Johnson; Cole Johnson; Tenney Johnson; Baron and Kana Johnson; and sisters: Mary Johnson; Betty Johnson; and Angela and Jake Allard.Calling hours will be held on Monday, August 31st from 6-8pm at Hale Funeral Home in Bradford, VT . A private Graveside funeral service will be held at a later date.The Hale Funeral Home and Cremation Care of Bradford, VT is in charge of arrangements.To view an online guestbook go to www.halefuneralhomes.com To plant Memorial Trees in memory of Steven Jackson Johnson, please click here to visit our Sympathy Store.

Steven Jackson Johnson was born on June 16th, 1947 and passed away on August 22nd, 2015. He was a renaissance man who did a little bit of everything and loved spending time with his family. He was the son of Ronald and Patricia Johnson and Norma... View Obituary & Service Information

The family of Steven Jackson Johnson created this Life Tributes page to make it easy to share your memories.

Send flowers to the Johnson family.