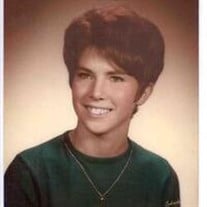 Post Mills, VT- Susan Southworth Ilsley, 63, of Post Mills, VT passed away suddenly at Dartmouth Hitchcock Medical Center in Lebanon, NH on May 2, 2015 Susan was the daughter of the late Roger Southworth and Rose McFarlane Southworth. Susan grew up in West Fairlee, VT and attended schools at Fryeburg Academy, Maine, and also Bradford and Thetford Academies. She worked for many years at King Arthur Flour and Merchants Bank. She loved visiting the Maine coast with family and friends. She enjoyed trips to Foxwoods and attending her granddaughters sporting events. She was most happy when her family was all gathered together. Susan was a source of strength, laughter and love to everyone in her life. Susan is survived by her husband of forty-four years, Barry Ilsley, together they had a son Brett Ilsley and a daughter Lisa Ilsley both of Vershire, VT; one granddaughter, Lauren Ilsley of Hanover, NH.; one sister, Penny Adams of Island Pond, VT and one brother, William Southworth of Corinth, VT; as well as a vast extended family and friends. She was predeceased by one brother, Nick McFarlane; A celebration of her life will be held on Sunday, May 10, 2015 at 2 pm in the Post Mills Church in Post Mills, VT with Rev. Gail Dimick officiating. There are no calling hours. Burial will take place at a later date. In lieu of flowers please make a donation to your local food pantry. The Hale Funeral Home and Cremation Care of Thetford Center, VT are in charge of arrangements. To view an online guestbook go to www.halefuneralhomes.com To plant Memorial Trees in memory of Susan Southworth Ilsley, please click here to visit our Sympathy Store.

The family of Susan Southworth Ilsley created this Life Tributes page to make it easy to share your memories.

Send flowers to the Ilsley family.