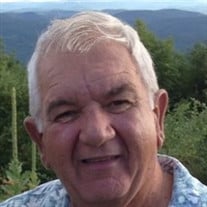 "You know, it's really kinda funny".is exactly how Tomas L. Perry, 65, of Fairlee would begin his numerous, entertaining stories with a twinkle in his eye, a Coors Light in his hand and a smile on his face. Tom passed away suddenly and unexpectedly on Tuesday, September 13. He possessed an instinctive[R1]creativity when it came to music, teaching himself to play any instrument he happened to pick up from piano, to mandolin to accordion. Tom was able to fix anything and thoroughly enjoyed tinkering and puttering. He was his family's construction consultant, mechanic, electrician, plumber;a jack of all trades. Tom was a kind-hearted, gentle soul; [R2]he and his wife, Jan, were never happier than when their children, grandchildren and grand dogs were all together. Inevitably, a roaring fire would be created in his firepit or a game of Catchphrase or cards played, with classic rock, oldies or country music coming through speakers "that would blow you right outta the water".When the train whistle blew, he and his youngest grandchild would jump in the car to chase it down followed by a stop at a train crossing near a local farm to pet the cows. Tom was one of the original 12 employees that began Hypertherm from which he retired after 36 years of service in 2014. He was just getting the hang of retirement by traveling a bit and had recently visited the Cayman Islands with his sweet Jan.The second offour children, Tom grew up in Orford, NH on Mt. Cube before proudly joining the National Guard. He graduated from Orford High School in 1970 and met the love of his life, Jan, in 1972 whom he married on June 30, 1973. Together they had 2 children, travelling frequently to Minnesota to spend time with his dearly-loved in-laws.He leaves behind his beloved wife, Jan, his children Amanda (Wayne) Rochon and Jesse (Amy) Perry, his grandchildren, Jaron, Caiden and Nicolas and his grand dogs, Brandy and Jaymee. He is survived by his brothers Tone (Carol) Perry and Todd Perry, sister Jenny (David) Smith, step-mother Linda Woodes, several nieces, nephews, grand nieces and nephews, cousins and dear friends.He was predeceased by his father, Leighton Perry, his mother Lucille Gilbert and some of his favorite dogs, Tipper, Ginger, Puppy, Missy and Tango.A celebration of his life will be held on Monday, September 19, 2016 at 11 am in the Hale Funeral Home, 187 Upper Plain, Bradford, VT. Visiting hours will be held on Sunday, September 18, 2016 from 1-3 pm at Hale Funeral Home. Burial will be held at a later date.To view an online guest book go to www.halefuneralhomes.com. To plant Memorial Trees in memory of Tomas L. Perry, please click here to visit our Sympathy Store.

"You know, it's really kinda funny".is exactly how Tomas L. Perry, 65, of Fairlee would begin his numerous, entertaining stories with a twinkle in his eye, a Coors Light in his hand and a smile on his face. Tom passed away suddenly and unexpectedly... View Obituary & Service Information

The family of Tomas L. Perry created this Life Tributes page to make it easy to share your memories.