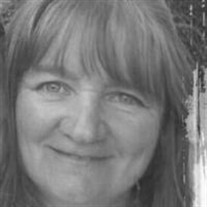 Corinth, VT-Virginia "Ginny" Hutchinson, 58, of Pike Hill Road died Saturday, August 10, 2019 at Brigham & Women's Hospital in Boston, MA.She was born October 26, 1960 in Hanover, NH the daughter of Clifford Comstock and Edith (Hodge) Comstock. She attended grade school in Corinth and high school at Thetford Academy. She was employed at Billings Dairy in Norwich, VT and was self-employed as a home healthcare aide. In later years she was a department manager at Walmart in Berlin, VT.On October 3, 1987 she married Randy Jay Hutchinson in Thetford, VT. Ginny loved her children and adored her grandchildren, family was above all else. She loved animals, especially her horses. She had a special sense of humor and wit that endeared all who knew her. She always enjoyed a good game of cards and watching football. Her positive outlook and company will be dearly missed.Survivors include her husband, Randy of Corinth, VT, two boys, Clifford Wheeler of West Fairlee, VT and Joe Hutchinson of Corinth, VT, two daughters, Jessica Wheeler of Flagstaff, AZ and Candi Hutchinson of Fairlee, VT, and beloved grandchildren, Kalob Wheeler and Ty Jones. She was preceded in death by her parents, and a sister, Joanne Comstock.Funeral services will be held Saturday, August 24, 2019 at 2 pm at the Meadow Meeting House, Chelsea Road, Corinth, VT. Burial will follow in the Meadow Cemetery. A Celebration of Life will be held following the burial. Arrangements are by Hale Funeral Home in Bradford, VT. To plant Memorial Trees in memory of Virginia Hutchinson, please click here to visit our Sympathy Store.

The family of Virginia Hutchinson created this Life Tributes page to make it easy to share your memories.

Send flowers to the Hutchinson family.