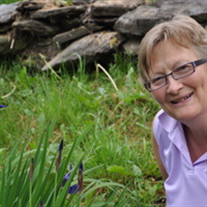 South Strafford, VTWanda Ann (Kniffin) Needham of South Strafford passed away Thursday, February 1,2018 at Dartmouth Hitchcock Medical Center in Lebanon, NH following a brief illnesswith her family at her side. She was 60 years old, or 58 depending on the day.Born on December 19, 1957 in New Haven, CT, she was the daughter of Phillip andRhae (Downs) Kniffin.Wanda was raised by her loving Aunt Ardel and Howard Whitaker. She was a graduateof Lamoille High School . On July 30th 1983 she married Ervin E. Needham in a smallceremony at their home on Copper Mine Road. She worked at ClinaPad when she wasyoung and with children at the Creative Preschool and later at Newton Elementary asparaeducator. Her hardest work was keeping four children (and then some) in line...She was an artist. Loved music, the sun, the ocean, and her family. She and her husbandspent the summers tending the vegetable gardens and swimming with her grandchildren.In the fall she would set up shop in the kitchen with him and put up their harvest. Shededicated countless hours as a public minister. She was, and will be counted as one of themost faithful women we know.She will be missed by many but mostly by her husband of 34 years, Ervin E. Needham ofSouth Strafford, VT. She leaves behind a son, Jason Needham, and his wife and children(4 of them) of Vershire, VT; daughter, Kelly Burrell and her husband and children (4 ofthem) of Salisbury,VT; daughter Katie Needham, her husband and children (2 of them)of Randolph Center, VT; daughter Casey Booth, her husband and child; extendedchildren include Michael, Bill, Scott, Sarah, Julie and Seth Ballard who she also lovedand cared for.A memorial service will be held at 2:00 pm, Feb 10th at the Kingdom Hall of Jehovahs Witnesses in Royalton, VT. A gathering will be held after service for friends and family,location to be announced at service. Those attending her memorial are asked to "wearbright colors and have a party after" per her wishes.Arrangments are by Hale Funeral Homes of Bradford and Thetford, VT.Online guestbook at www.halefuneralhomes.com . To plant Memorial Trees in memory of Wanda Ann (Kniffin) Needham, please click here to visit our Sympathy Store.

South Strafford, VTWanda Ann (Kniffin) Needham of South Strafford passed away Thursday, February 1,2018 at Dartmouth Hitchcock Medical Center in Lebanon, NH following a brief illnesswith her family at her side. She was 60 years old, or 58 depending... View Obituary & Service Information

The family of Wanda Ann (Kniffin) Needham created this Life Tributes page to make it easy to share your memories.